Walking Through the Feast of the Hunters' Moon Part 2 : Crafts & Foods

Ok, Ready for Round Two?  This is still going to be picture heavy so I will try to keep the chit chat down to a minimum .... (HEY!  I can hear you!  Quit giggling!  I really think I can be....oh DANG IT!)

First some unfinished business from yesterday.  I mentioned that the priest landed, but I forgot to add the pictures!     He came from up river, the Wabash River.  This beautiful lady travels from the eastern part of the state and runs west to our neck of the woods.  Then she takes a turn south and creates the southwestern border of our state. 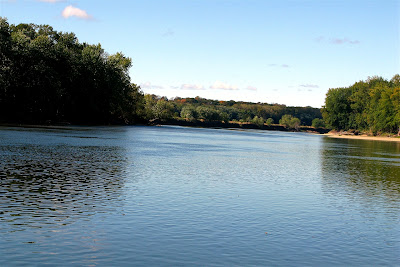 Some of the canoes that brought everyone in this morning. 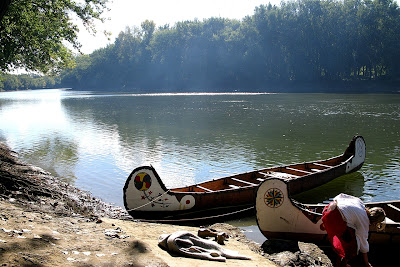 Everyone pitches in bringing in the boat. 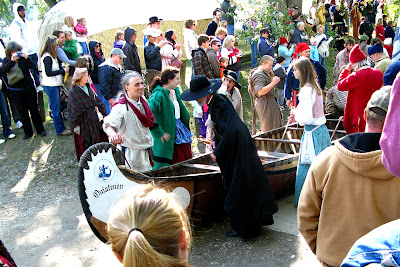 And now we have a blessing from the Father. 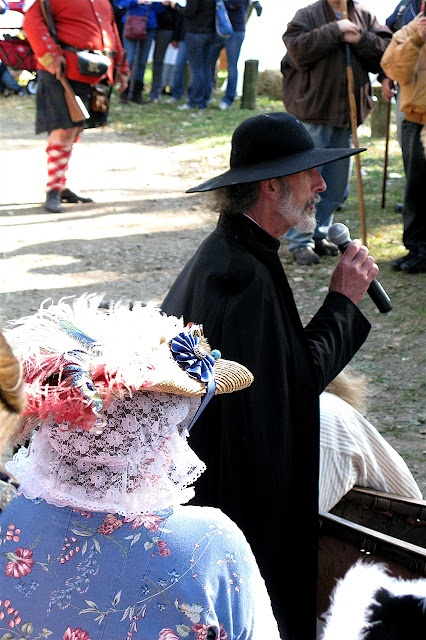 Now the rest of the pictures are a collection of our day.  A bit of food and a bit of crafting.  This gentleman is stoking the fire by blowing in a tube.  All food cooked is cooked as it would have been in the olden days, or as much as possible.  I did see a few thermometers in pots to test the heat of the oils. 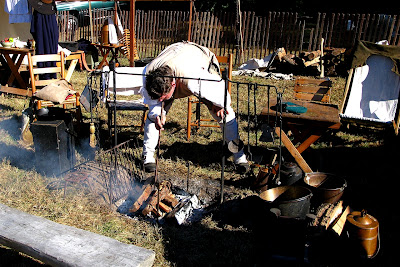 Some very fresh milk from a sharing goat. 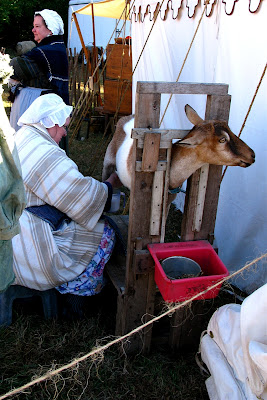 Beads are a big staple at The Feast.  Bear made her own necklace..... 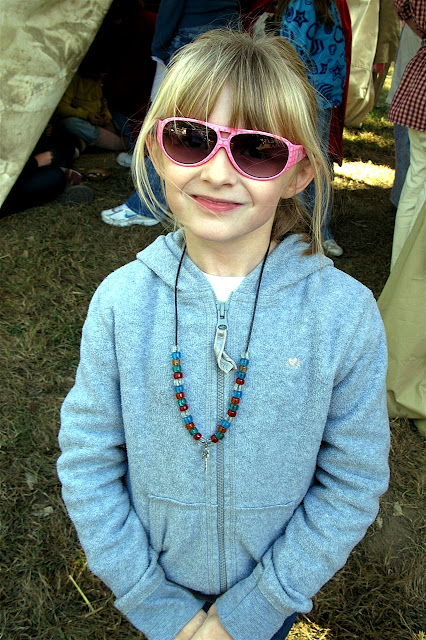 and Tink created her own bracelet.  All tied with knots. 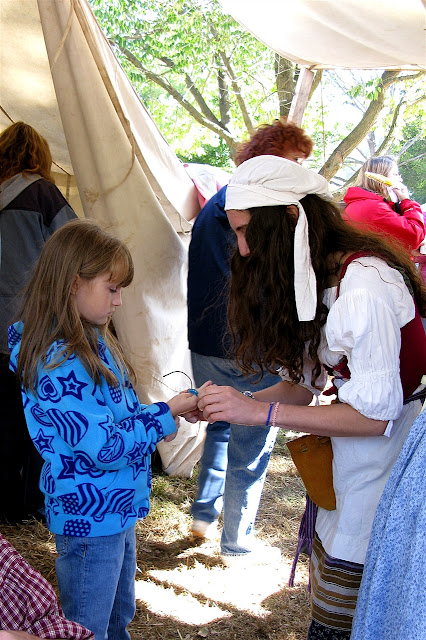 I believe this lady was boiling water along side some yummy pots of frying fish.
We had roasted chicken, and it was so yummy it didn't last long enough for a picture.
Buffalo stew and burgers are a big staple here too. 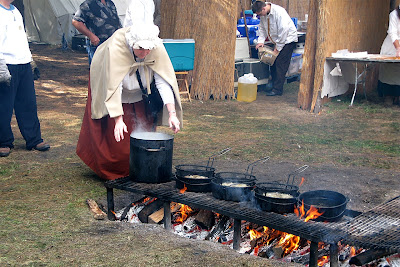 Remember the old Daniel Boone show where he threw the hatchet in to the log?
This is apparently much more difficult than some think.
We stood there and watched several take their turn, and only one
gentleman was successful!  NOT this one though.
This is an old fashioned lathe or some such tool that carved designs in to
the legs of chairs and tables. 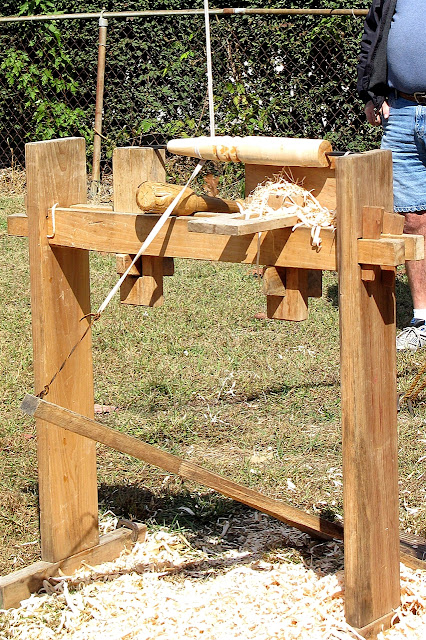 Here we have some very intricate lace work going on.
The wonderful lady behind all the strings kind of moves them
over and under each other and around all these pins to create
her design, in this case a heart. 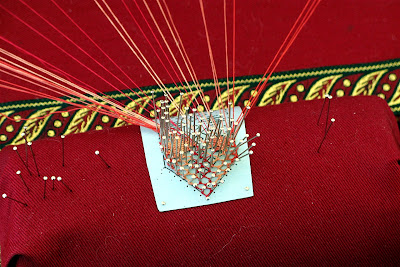 This lady was making a chain of lace.  All it is is a series of knots, but
it looks much more complicated, especially as the string gets more fine. 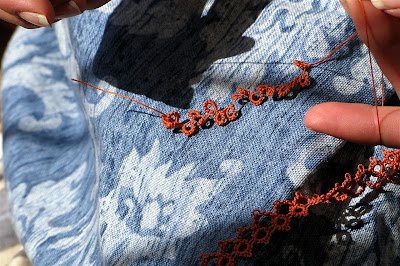 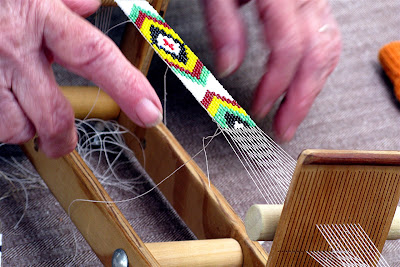 I had to snap these two pictures for all my gourdy friends, including Miss Ann! 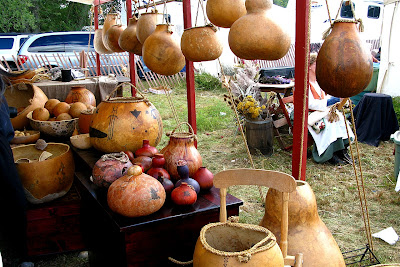 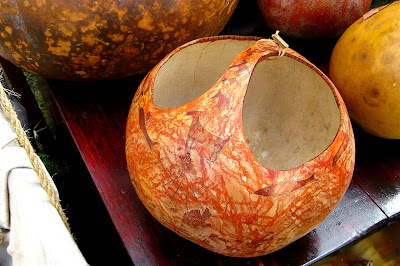 There were several booths selling wool, but this lady took it a step
further and made her own yarn, which she later weaves into cloth
and makes clothes like those hanging behind her. 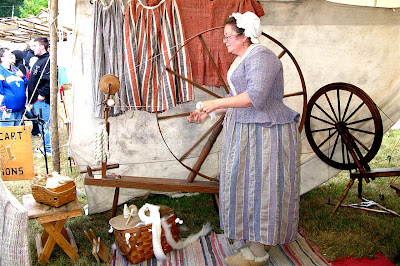 This trio just happened to catch my eye! 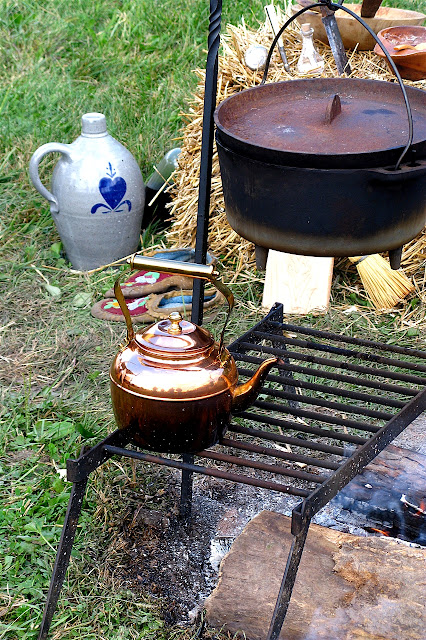 One of our last stops found us at the rope making booth where Tink and
Bear showed a bit of team work to make some rope. 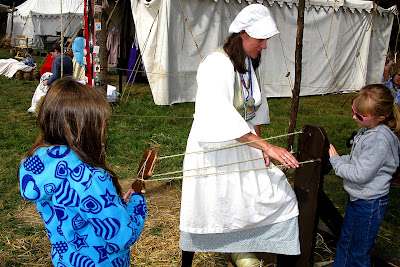 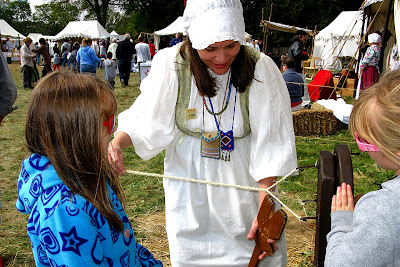 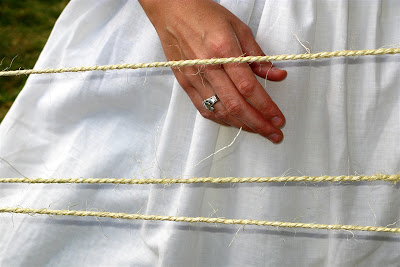 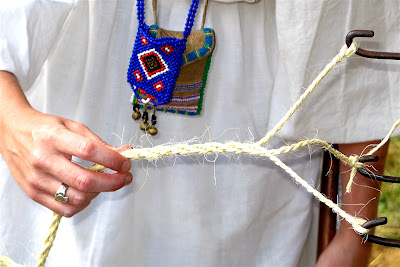 This might look like just a snapshot of people, but it actually the line for
APPLE DUMPLINGS! 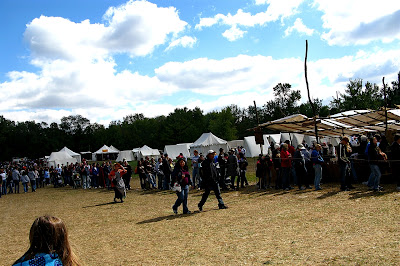 Check out the old time ovens used for baking these heavenly creations! 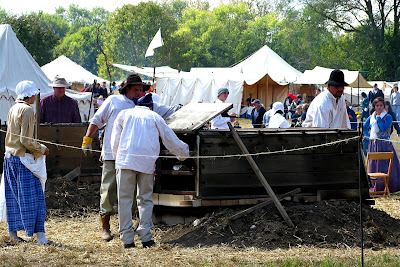 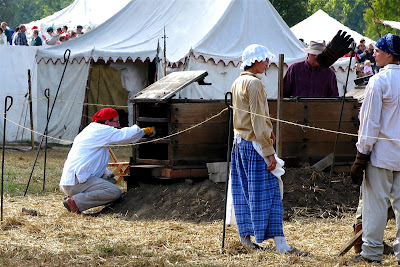 It is still kind of hard to see the finished product, but
believe me, they were delightfully delicious! 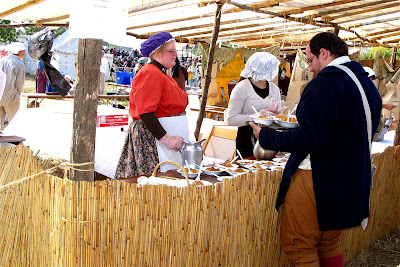 We enjoyed these two brothers' juggling act as we ate our apple dumplings.
They were very entertaining.  Can you tell they are juggling knives
in this picture?  The girls loved watching them!
They also juggled those huge things in at the bottom of the picture! 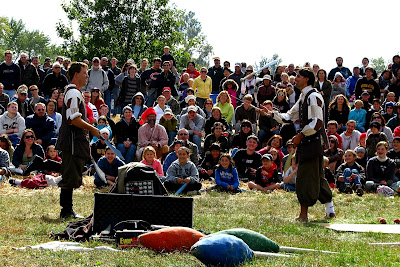 Alrighty, that is the end of our trip back in time.  The girls had a great time; I don't think they have ever had such an up close and personal visit to the 1700's.  Next year the Feast runs September 24-25.  Mark your calendars now!