Walking and Waiting for the Next "Big One" to Hit

So, the weather men and women are doing a little dance on the television and radios station around here, causing some to panic and some grocery store owners to hurry up and stock shelves:  Another big snow storm is coming with a second one on the way for the weekend if the prognosticators have it right.

Do big snow storms freak you out?  What do you do if anything when you hear "several inches" of the white stuff is on its way to your house?

I am a blizzard girl, survivor of the REALLY BIG snows of '77, '78, and '79.  We had snow EVERYWHERE!  At that time we lived out in the country, about a mile off the highway, and the only house on our road.  We were snowed in for THREE WEEKS!  Yep you heard me!  The snow snowed and the wind howled, and just when the road peeps thought they might be able to start plowing, it would blow again.  We watches a huge truck with a V blade on in trying to make its way up a north/south road that connected to our east/west road.  It spent hours backing up and trying to bust the 5-10 feet drifts on that road.  US 231 had snow piled up higher than semis.  I think I have a picture of that somewhere, but I will have to do some digging. Hmmmm.... This picture makes the snow look not so major, but maybe you can get an idea by how far the drift goes back to the right.  These roads were closed solid by this snowstorm! 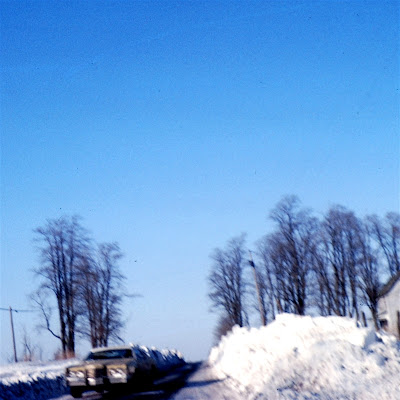 I became an ace puzzle-putter-togetherer, a champion euchre player, and a survivor of being cooped up with my brother for that long! We didn't have to make snow forts; we just dug caves into the monstrous drifts in the barn lot. 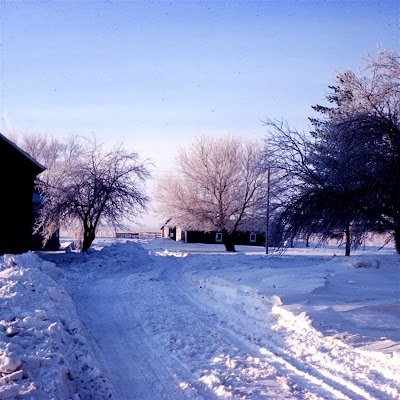 As I remember it the snow drift came about half way up the side of the crib that is silhouetted to your left.  Thank heavens the man who farmed this ground came to dig us out, or we would have still been shoveling out our drive.  The car was parked in the shed at the back of this picture!  Poor Dad!  (Poor us too if my memory is clear!  I'm pretty sure we all took turns with the shovel on these days).

It was just an incredible amount of snow, and it taught us some great lessons.  I have kerosene lamps in my pantry.  Tall Guy thinks I am a bit nuts because we do have a generator, but there are some instincts I just can't shake.  I even want to fill the bath tub with water "just in case!"  Do any of you have memories of a REALLY BIG SNOW?

OH!  One more thing:  this all happened in a far away long ago time where one did not have to make up school days missed by snow!  I know it will shock many people, but folks my age survived this time just fine and dandy without the missed school days.

With all this lovely "roughing it" experience, I have learned to be prepared!  I just filled up the car with gas, and have bread and milk on hand.  I did not buy a box or powdered milk, but that's what we survived on "back in the day."

I want to send a big warm hug to all my Indiana Farm Bureau friends stuck in Atlanta for the American Farm Bureau National Convention, where they just do not know what to do with or how to drive in snow.  I hope y'all make it home by spring!  Maybe you guys can make some extra cash by teaching those good ol' boys and girls how to drive in white stuff!

Be safe as these weather events pass through, and spend your time making memories and lots of cocoa!
Posted by Lana's LIfe at 3:24 PM