Boy girl do I need your help!

We had "issues" with a few of our 4-H steers and heifers, and I would love any guidance, knowledge, or saintly tail twisting you can send my way for next year's batch of cows when they come to the farm!  Here are just a few stories......

This darling heifer/cow is going to be a mommy in December, and she showed all the hormonal traits of a pregnant momma. 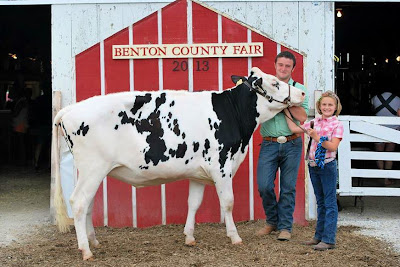 She used to be such a good follower, and our Bear loved her dearly; HOWEVER, she faked me out of my drawers TWICE, and I either need to go to a basketball camp to work on my defense or get Temple Grandin out here ASAP!

The first time this happened, there were no witnesses, but I will confess that I brought her home, led her off the trailer, had a few unruly moments until I told her I was leading this parade, then walked her in to the pasture, showed her where the waterer was, and then gently slipped off the halter so I could leave her to get reacquainted with her old/new home.  The little dickens turned right on a dime and beat me back to the gate!  I thought she was headed out across the road to open fields, but St. Brigid, you must have taken pity on me because Lady Bug turned around the truck and headed in to her old pen.  I quickly shut the gate, brought her a bucket of sparkling new, cool water and was ready to call it good until Tall Guy came home, but......She started being nice, and I thought I could get the halter back on her and walk her back out to the pasture so she could also have some grass to eat.  Yeah, uhm, the halter went on backwards, but it was on, and that was good enough for me to get her moving back to the pasture.  She wasn't liking any of this, and I had visions of me skating through the barn lot desperately clinging to the halter, when again St. Brigid, you sent Grandpa to me.  He pulled into the barn lot, tried his best not to laugh, and helped me lead her AND secure her in the pasture.  I think that might have been the happiest I have ever been to see my father-in-law!

Cut to a couple of days later, and Tall Guy asked me to go out and keep LadyBug at bay while he drove through her neighborhood to dump a batch of feed.  I didn't say, "No Problem" because I started to learn that this version of LadyBug had a few attitudes in need of retraining.  Out I went, though, a bit leery and much more on alert this time.  I backed her up all the way into the pasture so I had only a narrow gateway to block.  You should have seen that cow.  Swear to heavens she has some Michael Jordan in her!  Her head kept bobbing back and forth trying to find an opening, and I was out there in my best defensive stance trying to match her zig for zag.  After about four minutes of this, she stood very still....So I thought I would take this moment to go up and scratch her jowls and neck like she liked.  She enjoyed that for about a minute, then BAMM!  She faked me right out of my socks and blew through my area headed straight to the back lot.

I had the lovely pleasure of turning around and seeing Tall Guy about ready to fall off his perch on the top of a fence because he was laughing so hard at me.  He said he wished he had a video camera.  I gave him a very "wifely" wave, may not have used all of my fingers!  We, LadyBug and I , had a polite stand-off until TG could finish his job and help me get her back where she was supposed to be.  Little bitt  momma just followed him right back up to her pasture while he drove the tractor, and I think she actually flirted with him right in front of me!!!!! 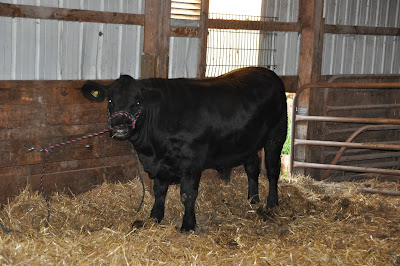 Cut to a few days later, and the black crossbreeds were up to shenanigans.  We are waiting for the bus, and Tall Guy yells, "Cows out!"  The bus is like 3 minutes from arriving at our house, and both girls go racing out the door!.. I will give them credit for trying to stop and change foot gear, but TG said, "NOW!" so they went on, and I prayed while I dashed upstairs, because I was inappropriately dressed to chase cows, especially with that wind blowing like it was.  The steer, Aladin, somehow managed to jump over his fence, and Dear St. Brigid, the heifer was somehow securely in the pen next door with the dairy calves....... Know anything about that one?  It's a mystery to us how she got in with them.  Tall Guy fixed the fence while I shooed the girls off to the bus, and tried to keep the little fur ball kittens from getting under BIG hooves. They may have been tiny, but they had no fear!

Can you handle one more?  TG left early one morning to haul beans to a town south of here.  I decided to enjoy a little sit-in-bed-and-read time with The CBS Morning Show going on when he called me and says,

Ok, whatever.  He ALWAYS secured our trusty baling wire tie to the gate to keep the cows in, so I go back to reading.  Next thing I know a truck pulls in the drive... DANG!  Now I have to put on appropriate undergarments and go outside.  I went with flip-flops to see what the truck wanted and on my way did a quick check on the calves....ONLY ONE COW IN THE PEN, gate open, other black calf no where in sight!  CRAP!  I go over to the guys in the truck, ask if they have seen a cow wandering, and they, who are there to pick up a few bales of straw, say,

I flew back into the garage, plopped my feet in one of the girls' boots, then... well never mind, but I found mine next and went zipping out to get the cow!  The guys have their window rolled down and say,

So off I gingerly went to try and stop the heifer from running across the road and into an open bean field, again assuming any serious defensive b-ball plays I'd ever seen, and finally got her headed back to the tool shed.  Almost too late I realized BOTH the south and east doors were open as I came around.  The guys were now, miraculously out of the truck but standing right by it watching the whole scene unfold.  I mustered up my nastiest teacher face and kind of ordered them to at least go close the east doors! Sheesh! All by myself I got her back in the pen, just as I heard the rumbling of my knight in shining armor pull back into the lane because the more he thought about it, the more sure he was that the gate was open.

So St. Brigid, I am on bended knee asking for your help, guidance, and any gifts of cow whispering you wish to bestow on me or any of my family so that the next group of  cows might become more obedient and trustworthy.
Posted by Lana's LIfe at 6:23 PM