So What/Who Are You? 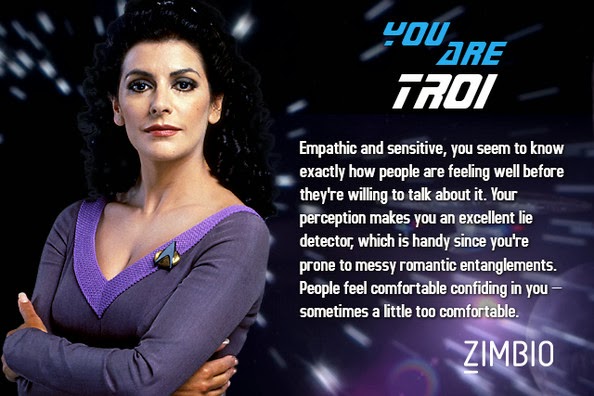 I'm not sure if it's cabin fever or what, but I have jumped on the band wagon with several of my Facebook pals and fallen into the abyss of filling out these 10 question personality evaluations.  It really is kind of fun, and there might just be a relationship/correlation between all the results!
Star Trek Next Generation Character I most identify with:  Deanna Troy, the Empath/counselor
Star Trek Original Character:  Dr Leonard McCoy, or Bones as he is affectionately called.  Loved him!
Career Most Suited to Me:  Humanitarian I think teacher would fit in there!
90's Movie Soundtrack:  Batman Forever  hmmmmm Seal's "Kiss from a Rose..."   hmmmm.....
Downton Abbey Character: Matthew Crowley  Don't know him, but he seems nice!
Classic Rock Band:  The Rolling Stones   (That's just bogus!  I'm an Eagles girl all the way! But I have been known to get down with Mic and the boys when the mood strikes.)
US State I Should Live in:  Alaska   (It is on my Bucket List as one of the few states I have not visited, but I politely decline that invitation until July or August because of the last three months of weather around here!)
Disney Villain:  Maleficent ( I didn't actually publish that one, but Angelina Jolie is going to portray this evil pain in Auroa's life, aka, Sleeping Beauty.  I don't like villains!)
Disney Sidekick: Olaf from Frozen......sigh.......gotta be all the snow outside
Let me share with you what I learned:
1.  I need to get up from my chair and walk away from this computer.
2.  I am easily swayed by the actions of my Facebook friends (Sarah, Jent, and Kristi to name a few!)
3.  Except for the match up with The Stones, I see some truth to certain personal character traits.
4.  I have seen my friends results nail the personalities I see in them most of the time.
5.  I need to know wich Pink Lady I would be from the movie, Grease!
Sometimes you just need a bit of self-introspection right? 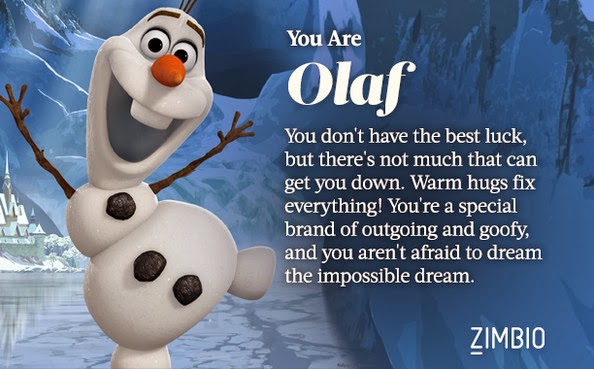 By the way, I got Jan.  Guess I am a goofy sidekick, but I was secretly hoping for Rizzo! 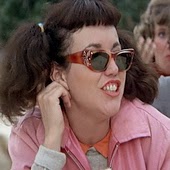 Email ThisBlogThis!Share to TwitterShare to FacebookShare to Pinterest
Labels: Humor