Part 1 Farm Life Series: Oh the things we do for our husbands!

Wednesday morning the weathermen were able to redeem themselves a bit from the miss on the last "big snow" with a royal bull's eye at our farm.

It is always hard for me to sleep when I know a big storm is coming, especially when school is not called off or delayed the night before.  Call it Momma's Worry; it is what it is, which means I can tell exactly when the rain turned to snow at our house....right around the magic hour of 4:45 a.m. (which was and still feels like the 3:45 a.m. time it was a week ago!)  Anywho....Don't even get me started on the time change!

Turned on the local news at 5:00 a.m. to see what was happening; meanwhile, Tall Guy got up, dressed, and ready to head to Lafayette with three cows scheduled to go in for processing.  I made him swear he would turn around if the roads were too bad.  Well, he did come back but just to get his phone!  Meanwhile right at 5:45 the calls started to come in announcing that school was cancelled.  We had two calls, apparently the first call had the wrong month, but SERIOUSLY PEOPLE!?!?!  You know the nice lady was calling school off for this morning!  Then the phone rang again.......

"Honey?  Can you do something for me?"

"Sorry Babe, but yes.  Could you go out to the cow lot and run the conveyors so that they don't freeze up as the rain turns to ice/snow?"

"Yep!  Love you Babe!  Gotta keep going down the road."

For those of you who have not been out to the lot with me on other posts, we have a set up that is a bit older than me, so let's just say 50-something. It was built when Tall Guy had the dairy, and we still use it to feed our cows.  The whole thing is tied in to our silos, where we keep the silage, but it's basically out there, unprotected from the elements. If any of the chains freeze or break, then we cannot pull silage out of the silo or grain out of the bin and feed it in the bunkers......Big Important Stuff..... AND it's been my experience that 98% of the time there is an issue with the feeders, it's either very hot, very cold, or very wet!  I've been out there in the middle of a thunderstorm....loads of fun! 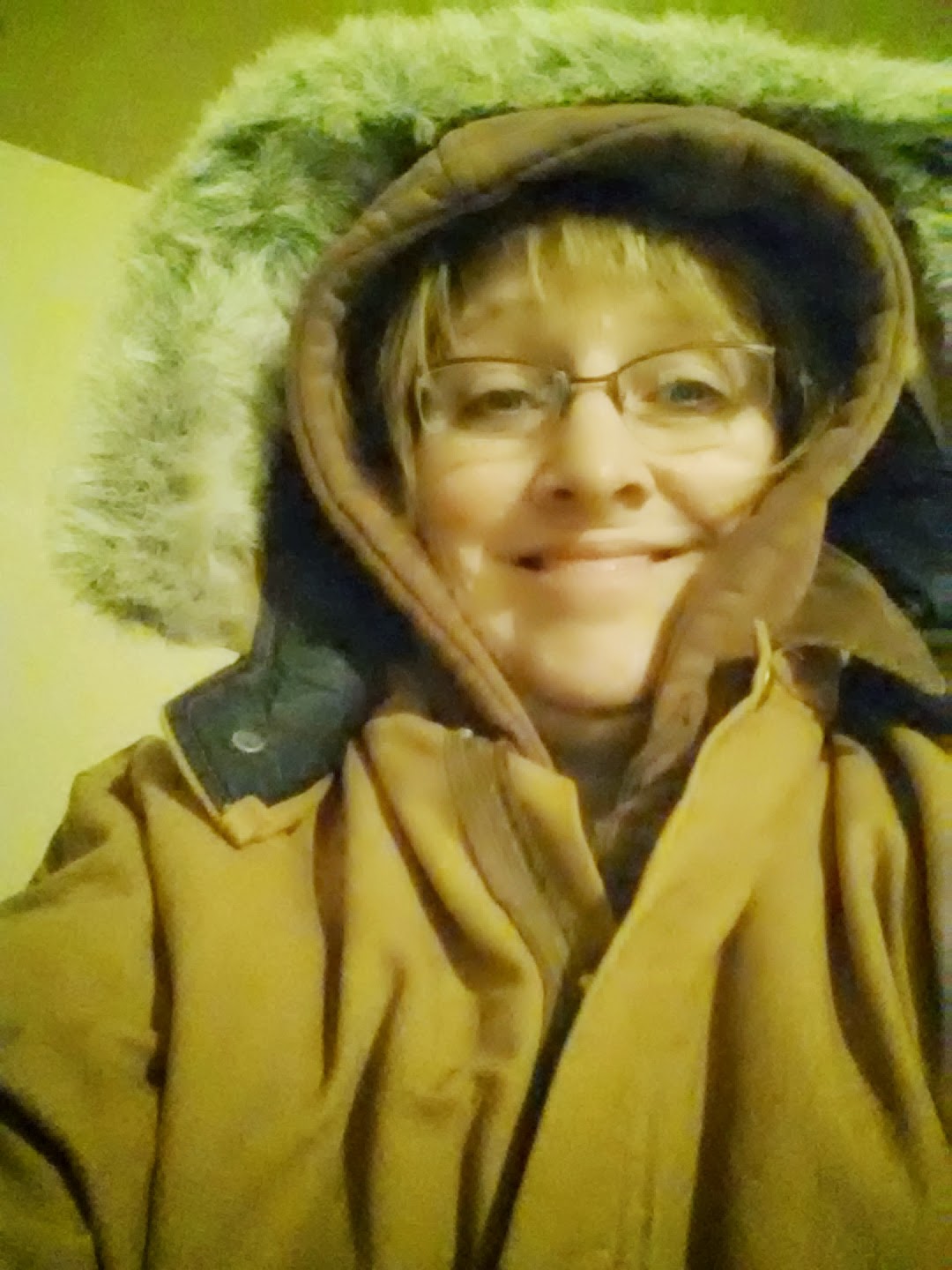 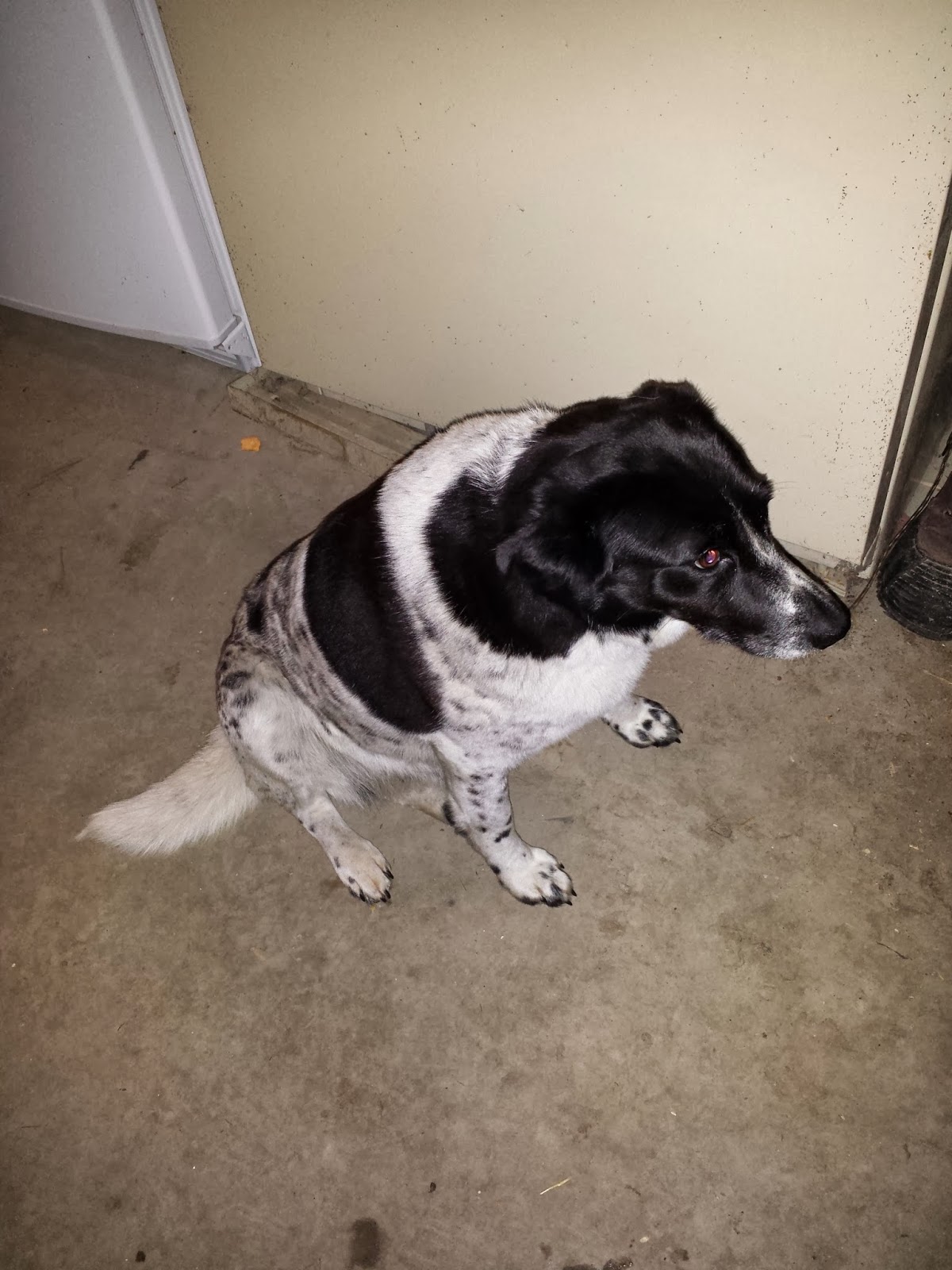 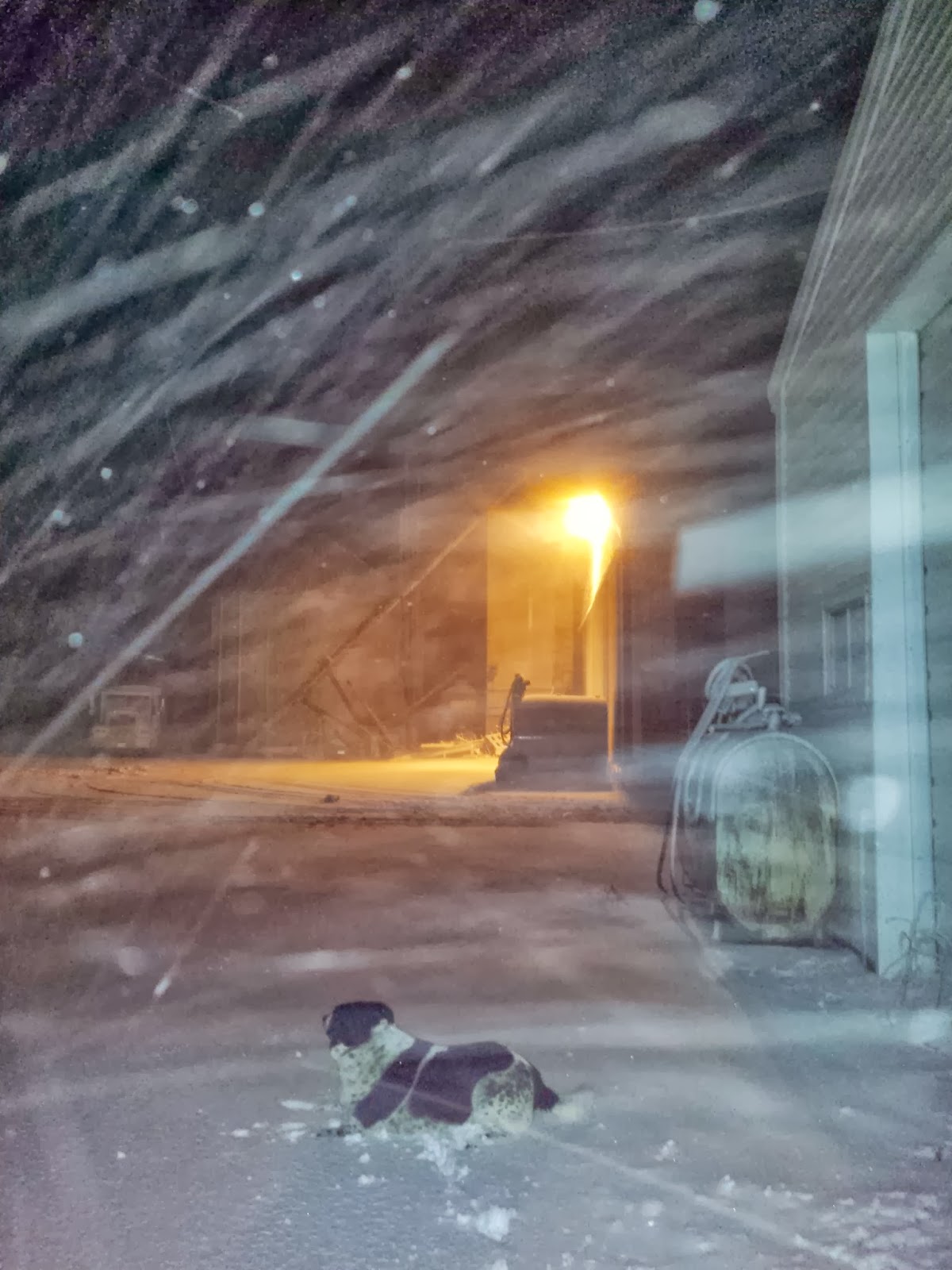 Every window pretty much looked like this or worse.  Bear said she couldn't see a stinkin' thing outside because all the windows were covered. 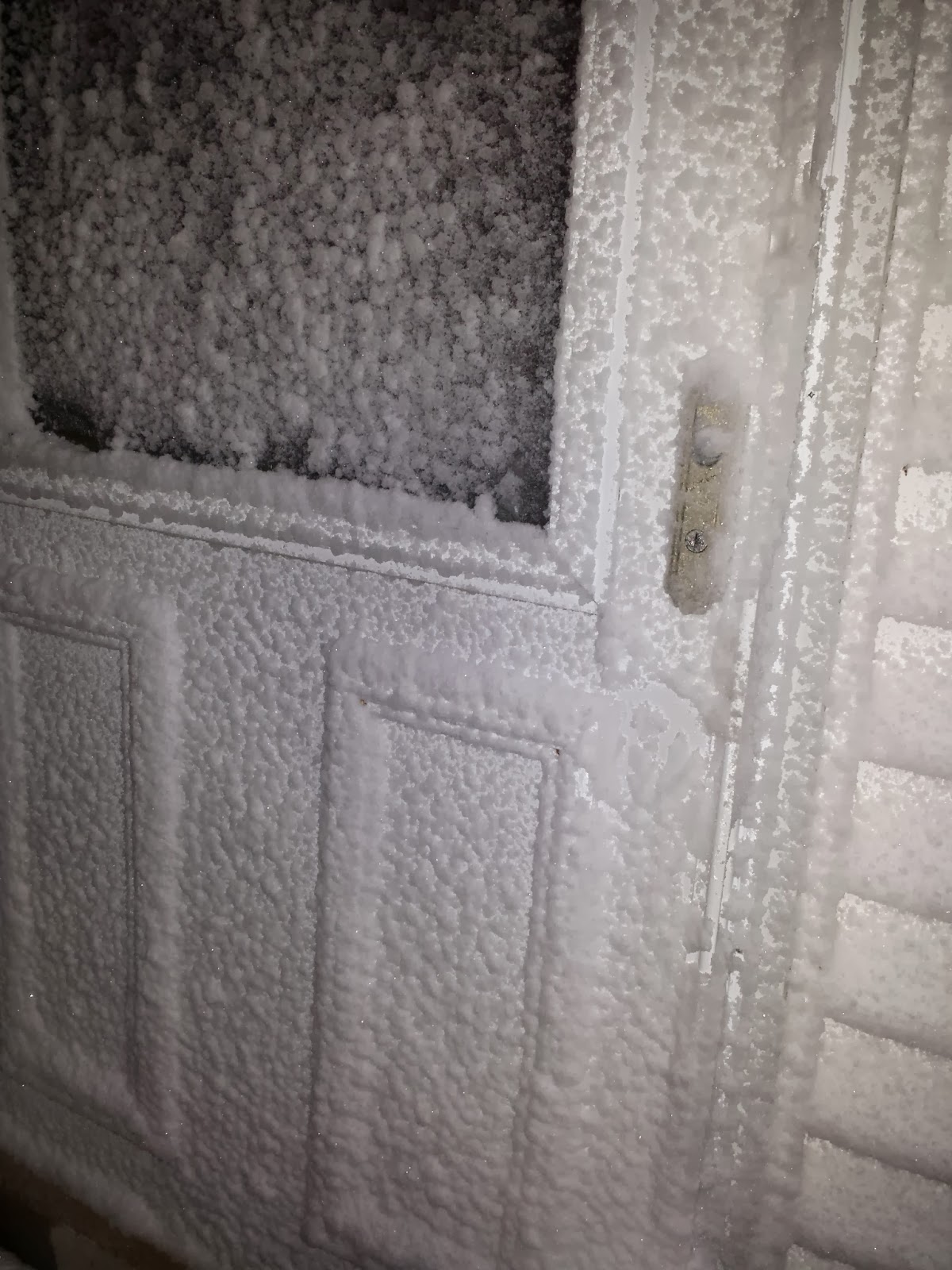 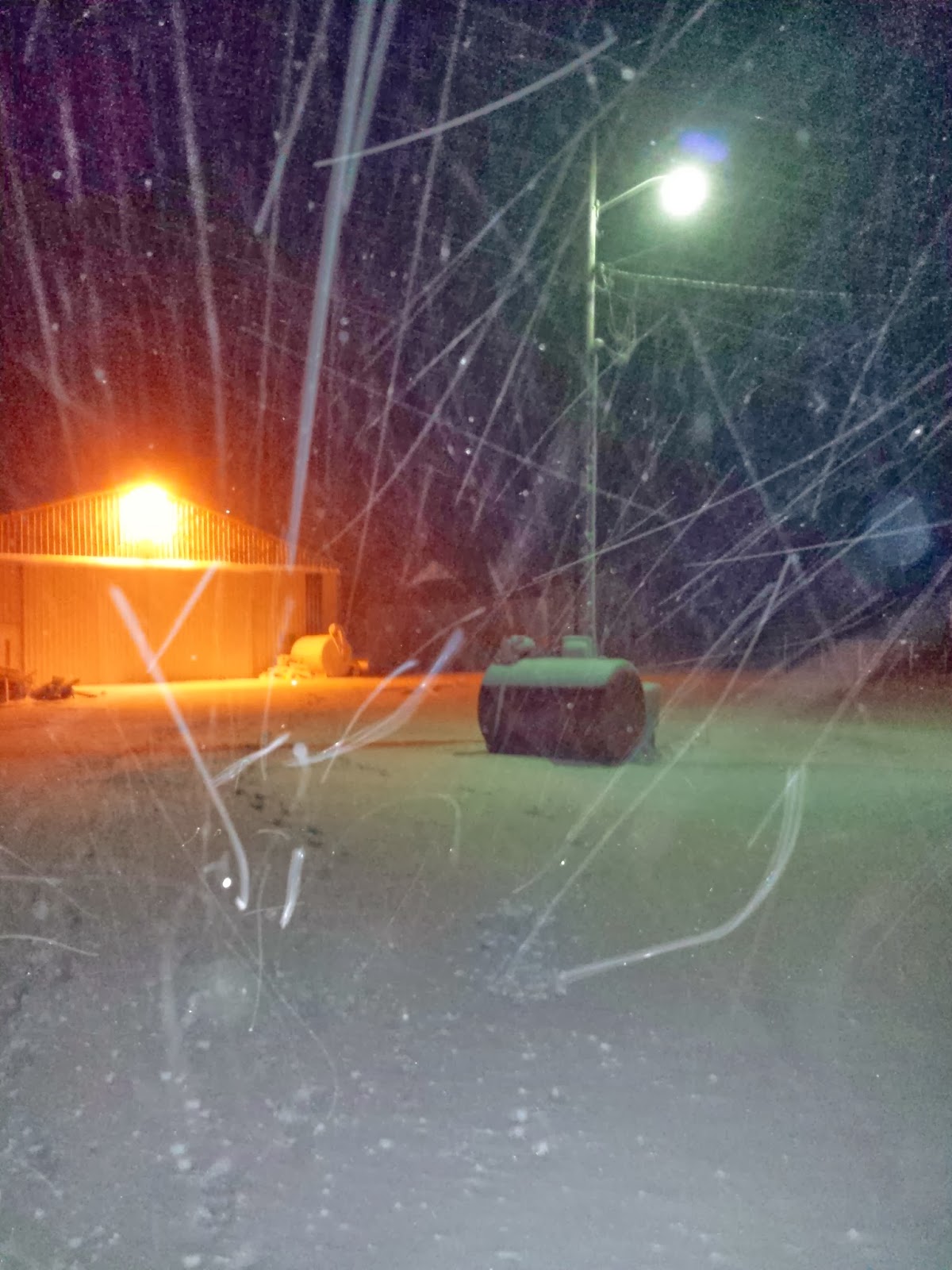 This is the chain I had to uncover and unlock.  Hands were freezing, and I was trying not to drop my phone on any hard surface or into any organic matter. 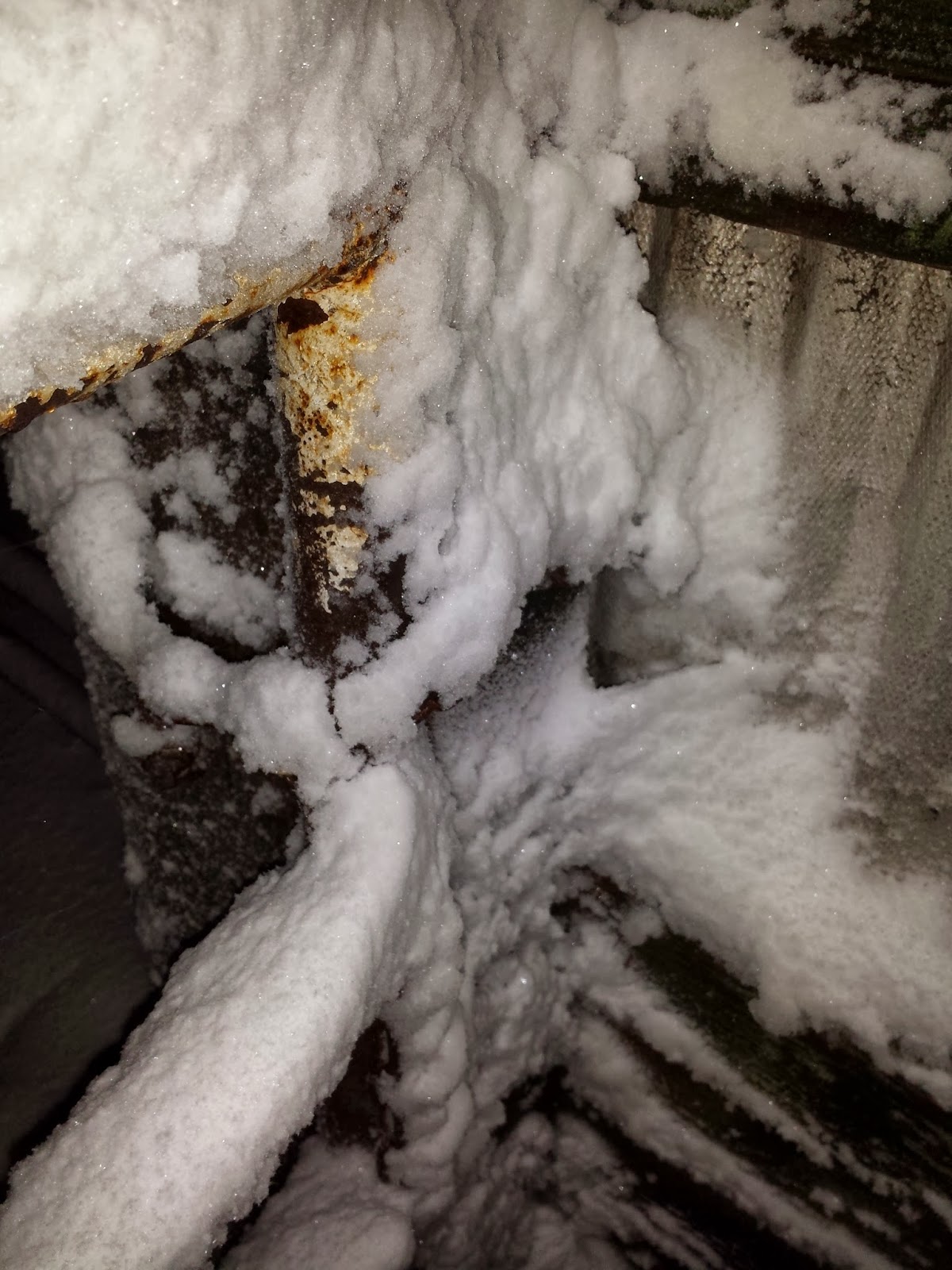 And this is the control box with all the buttons I needed to push and few I needed to NOT push. 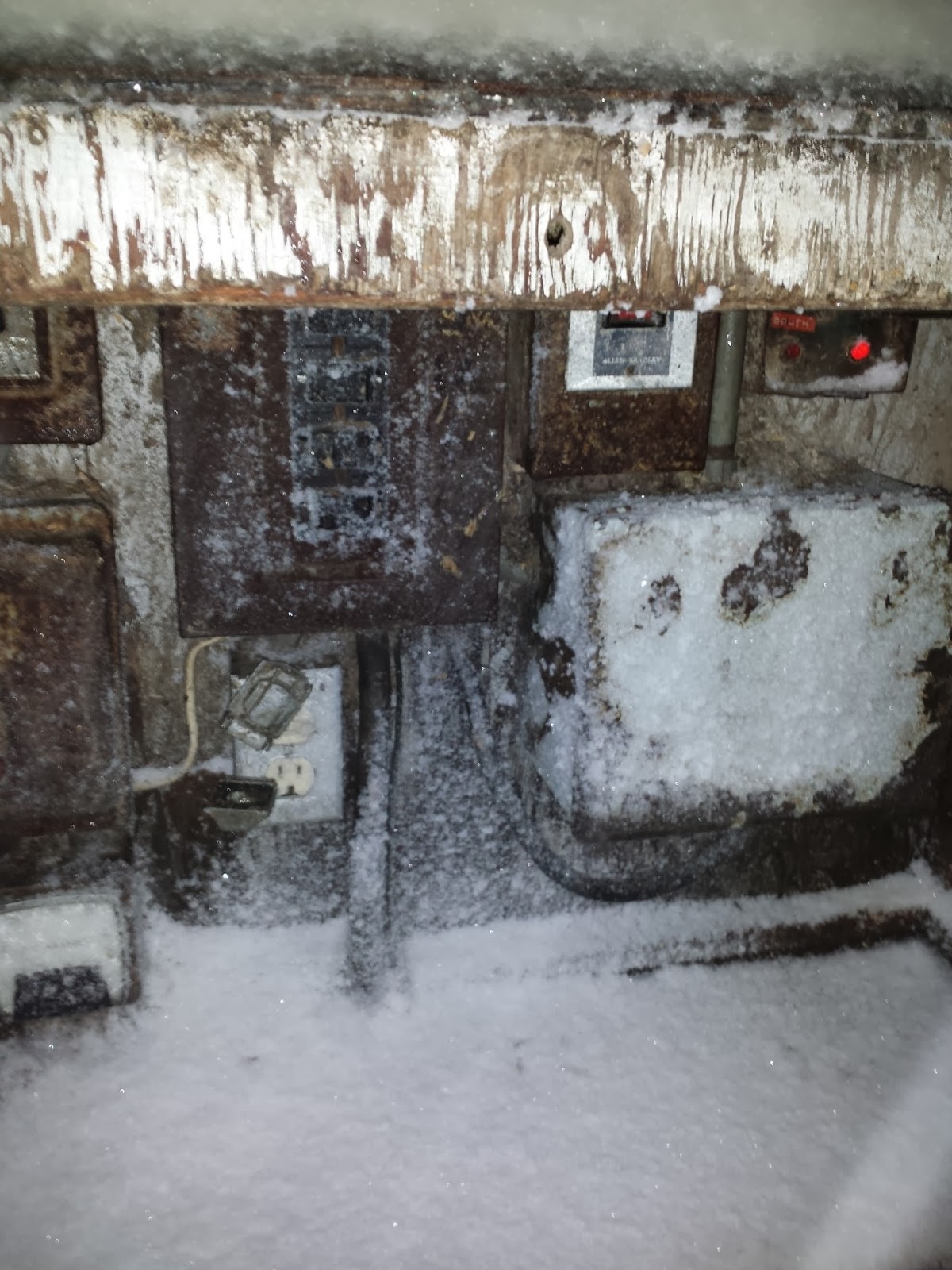 This is what it looks like on a nicer day. 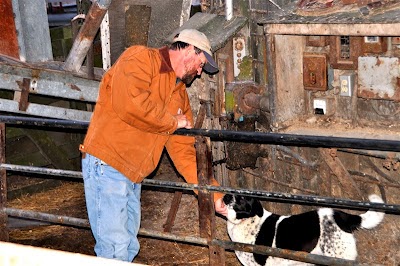 And here are the lovely conveyors and shuttles that needed to run and get the water out before they froze. 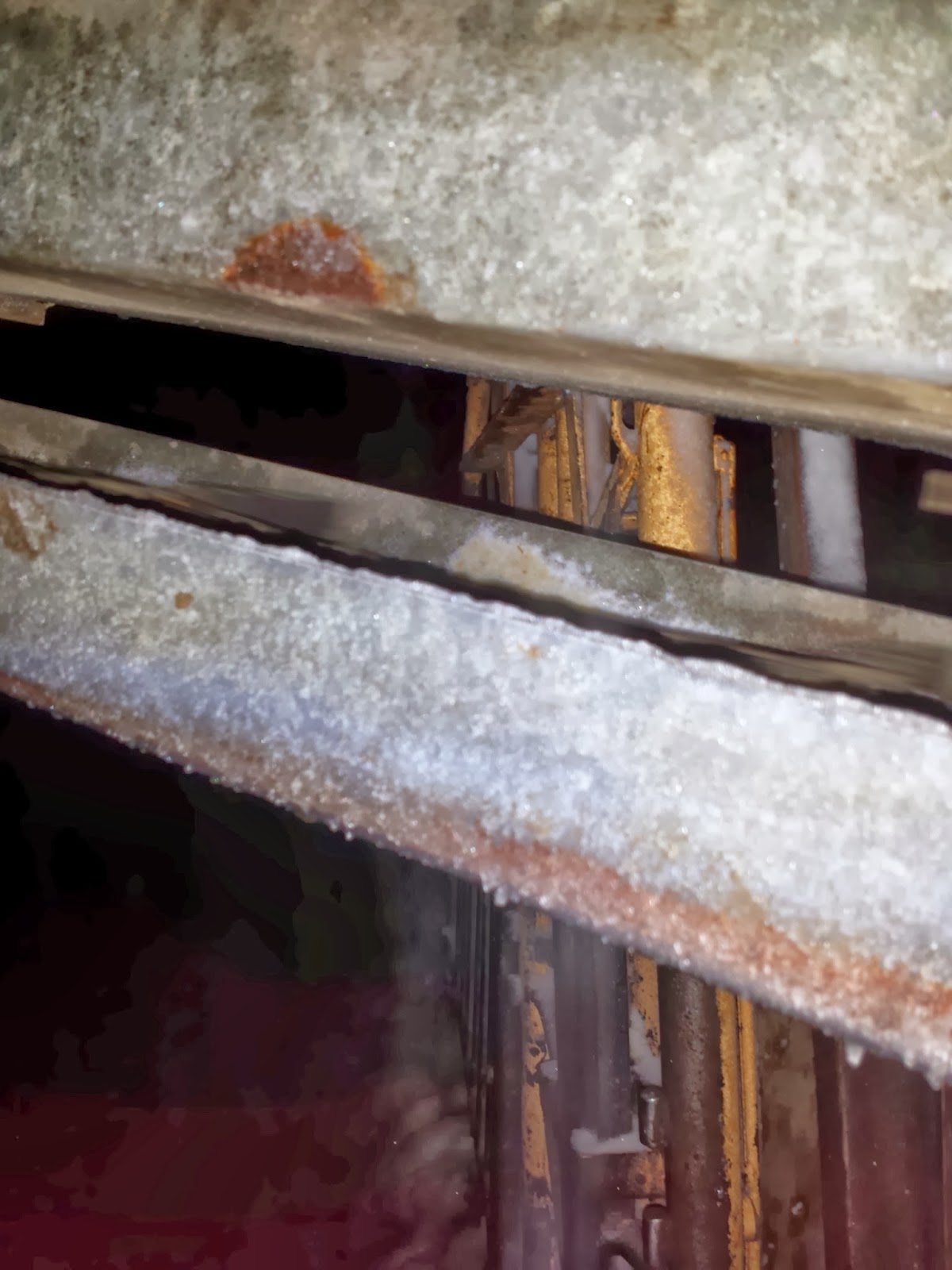 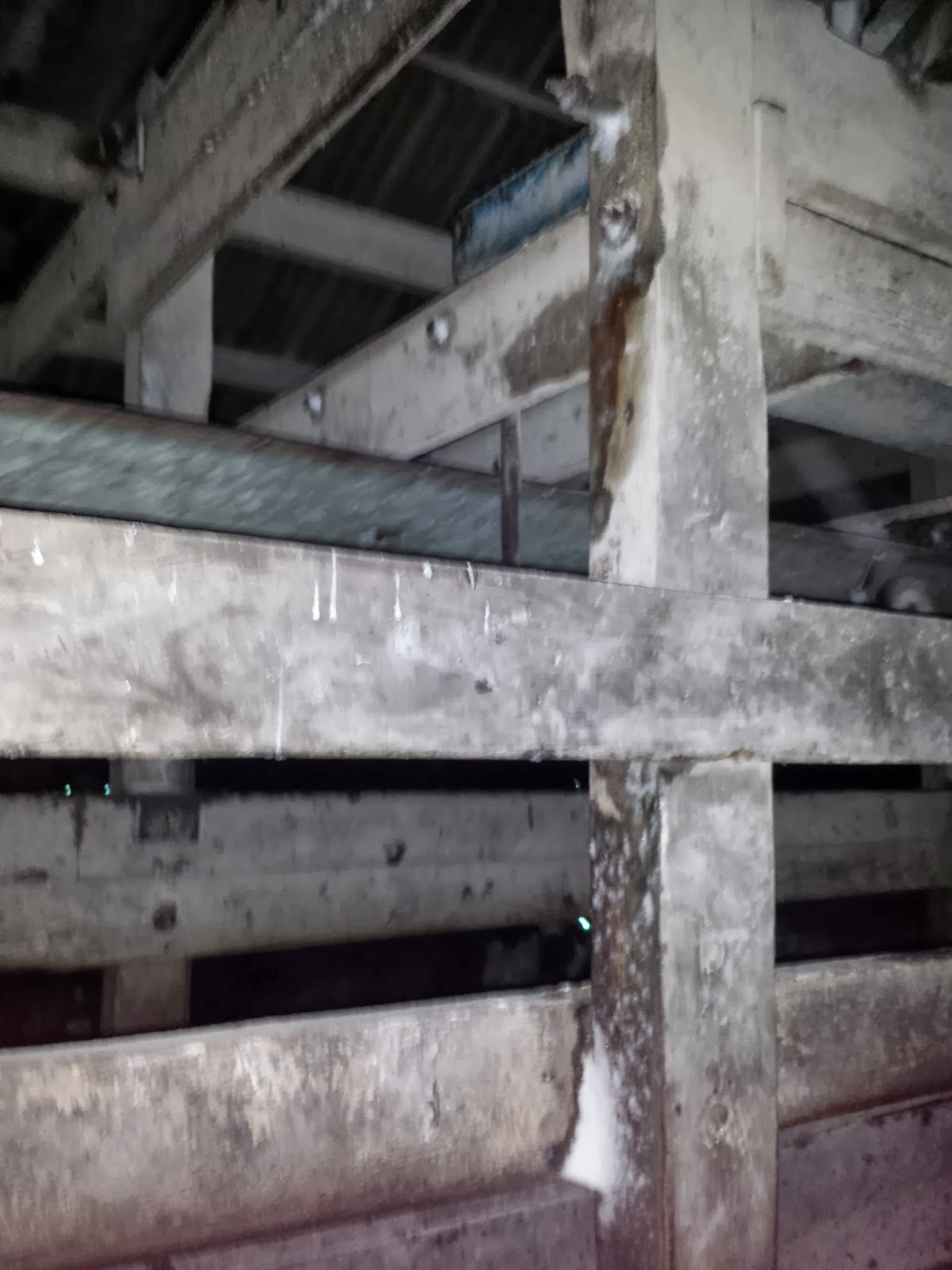 And on a drier day. 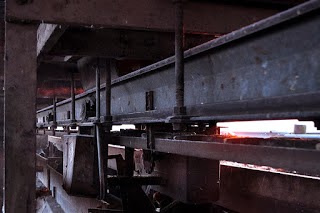 I quickly discovered, much to my dismay, that what looked like a big pile of snow was, in fact, a big pile of poo with about 2 inches of snow on top of it!  CRAP!  (pun intended) 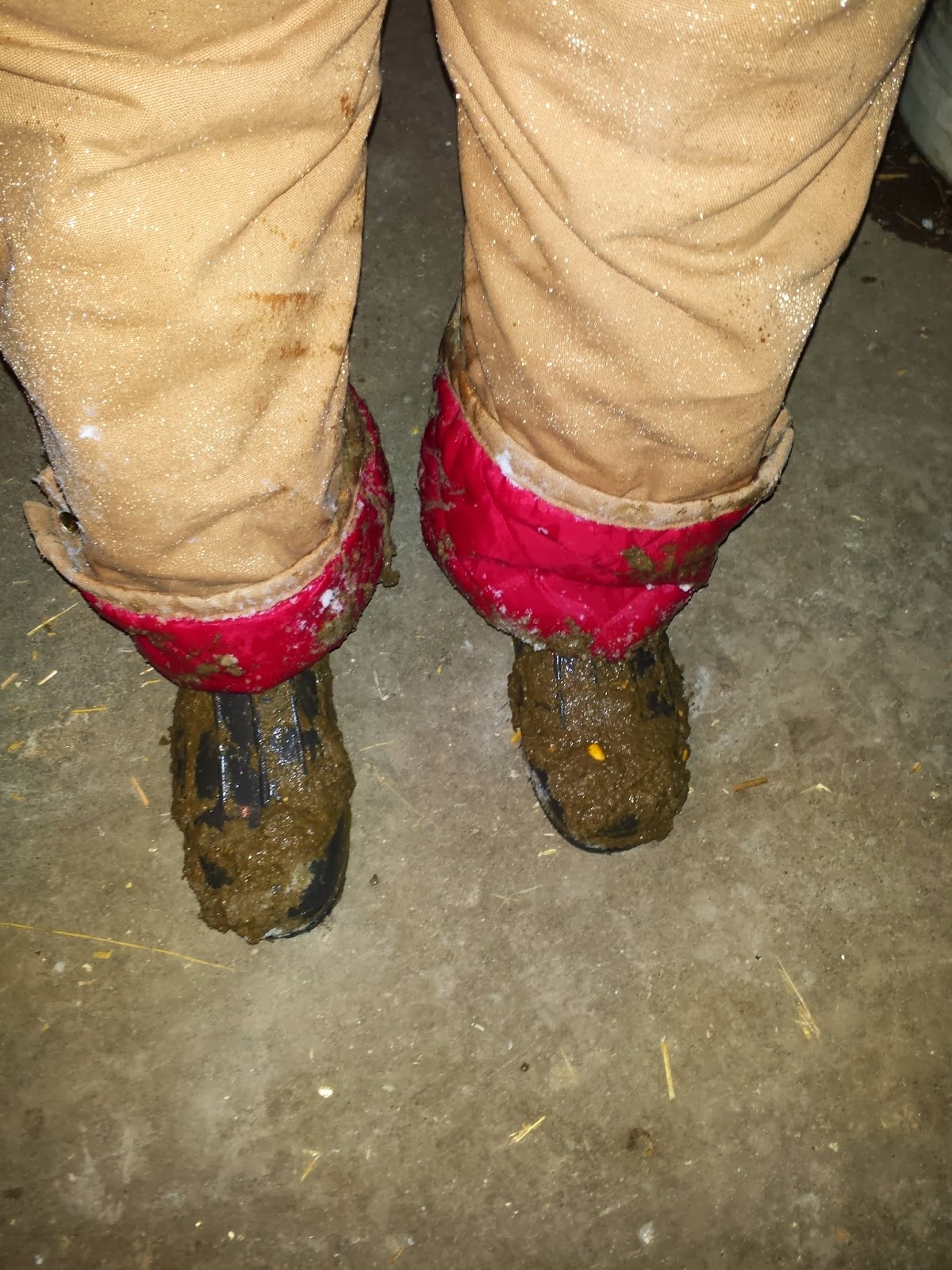 And then, of course, the cats discovered me and were underfoot until I fed them.  These guys are supposed to be in the tool shed, but I think they ate all the barn cats' food.  Oy! 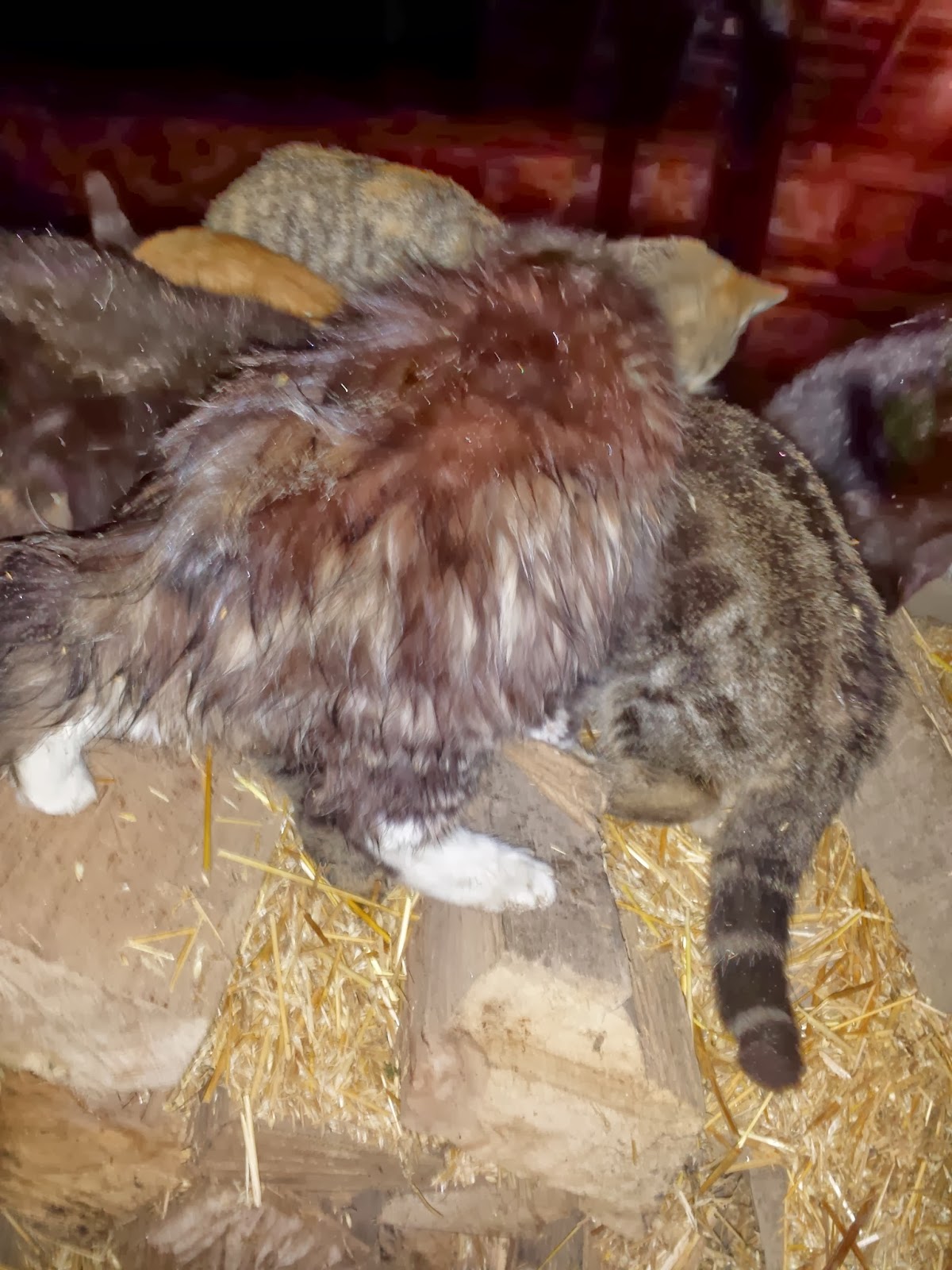 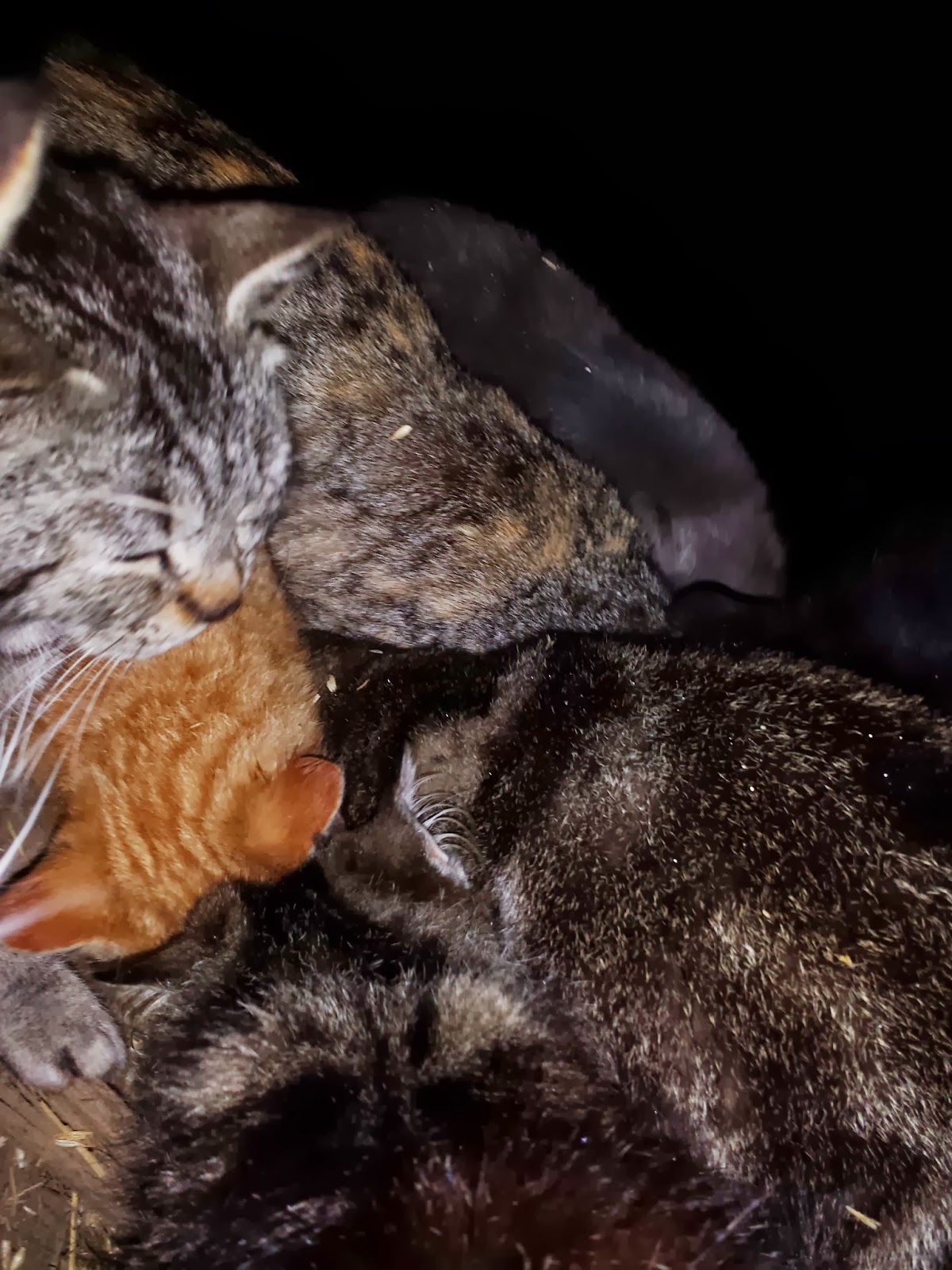 All of this fun took a good 45 minutes to happen, and by then I was wide awake and worrying about TG getting his silly self home with the truck and trailer in tact.  He did, and off we went to greet the rest of the day.  It may seem like farmers are not so busy once the combine is put away, but there is always something to do on the farm, especially when you have livestock, and a lot of it seems to occur in the most extreme weather situations.  Hope you all enjoyed the sleeping in if you got the chance!

*All these pictures were taken with my Samsung Galaxy 4 phone that was doubling as my flashlight!  Have I told you how much I love my phone?  I did nice them up a bit with this new Lightroom program I am trying out. The options on photo editing are very cool, what I have figured out about it anyways.  The secret to a long life is to keep learning!

Stay tuned for more stories from the farm!
Posted by Lana's LIfe at 6:00 AM