After 6 Years of dating and Almost 13 Years of Marriage, IT Finally Happened! CRAP!!!!!

ARGGGGG!
Thanks Mr. Schultz for creating this character who expresses most of what I am feeling right at this moment!
I still cannot believe it!  TWICE in the short span of twenty minutes I accomplished what I have never accomplished before! This story is going to take a while to tell so go potty, get a drink, and get comfy!
Do they give medals or awards for this moment.......uhm.....I hope not!
It all started with me going out to help Tall Guy move some cattle around. For those of you not living in the midwest, it might be important stop to say we've been having a bit of rain here, like to the tune of 4+ inches in the last week.
Lot before the rain: 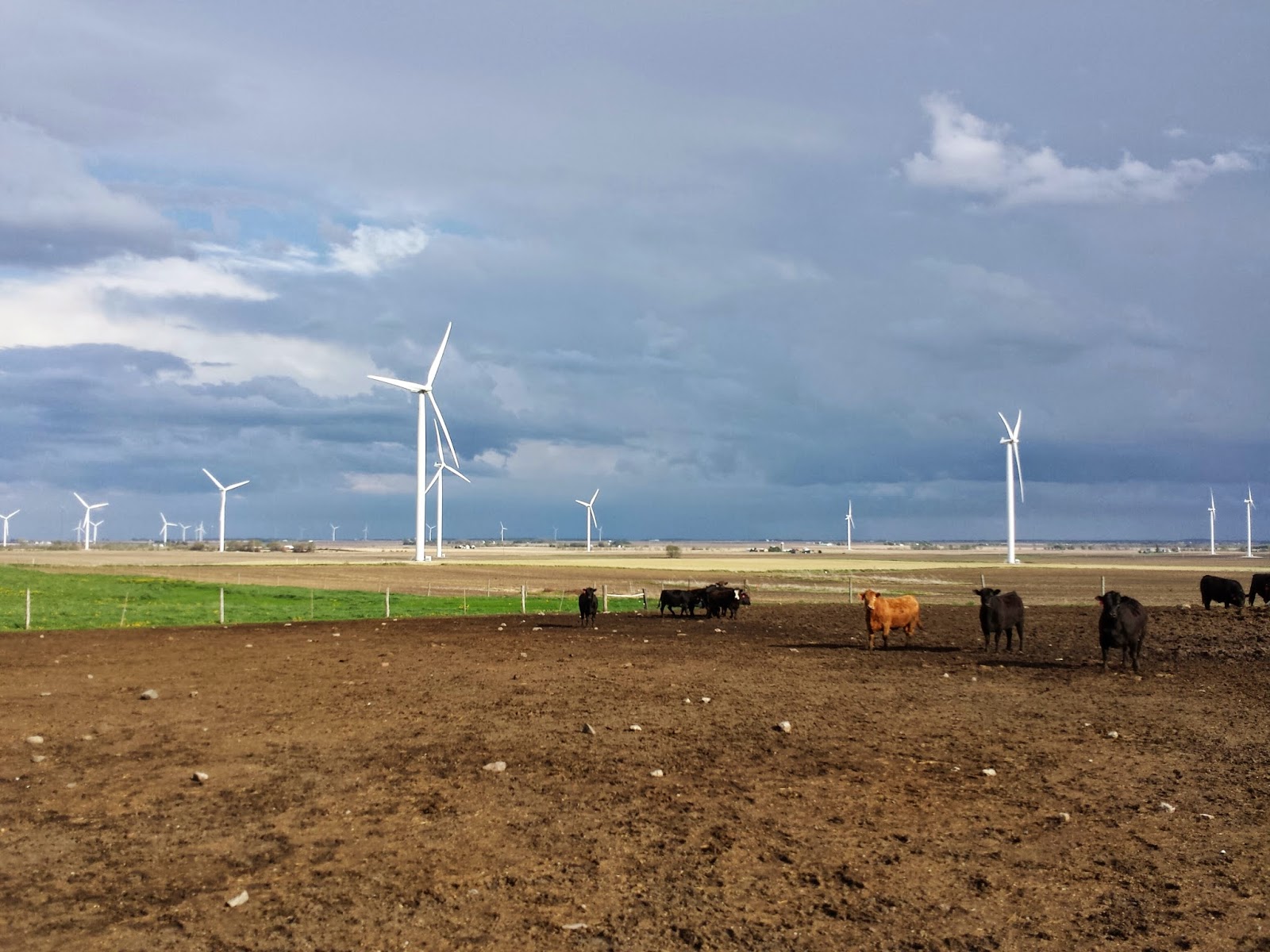 Lot after the rains: 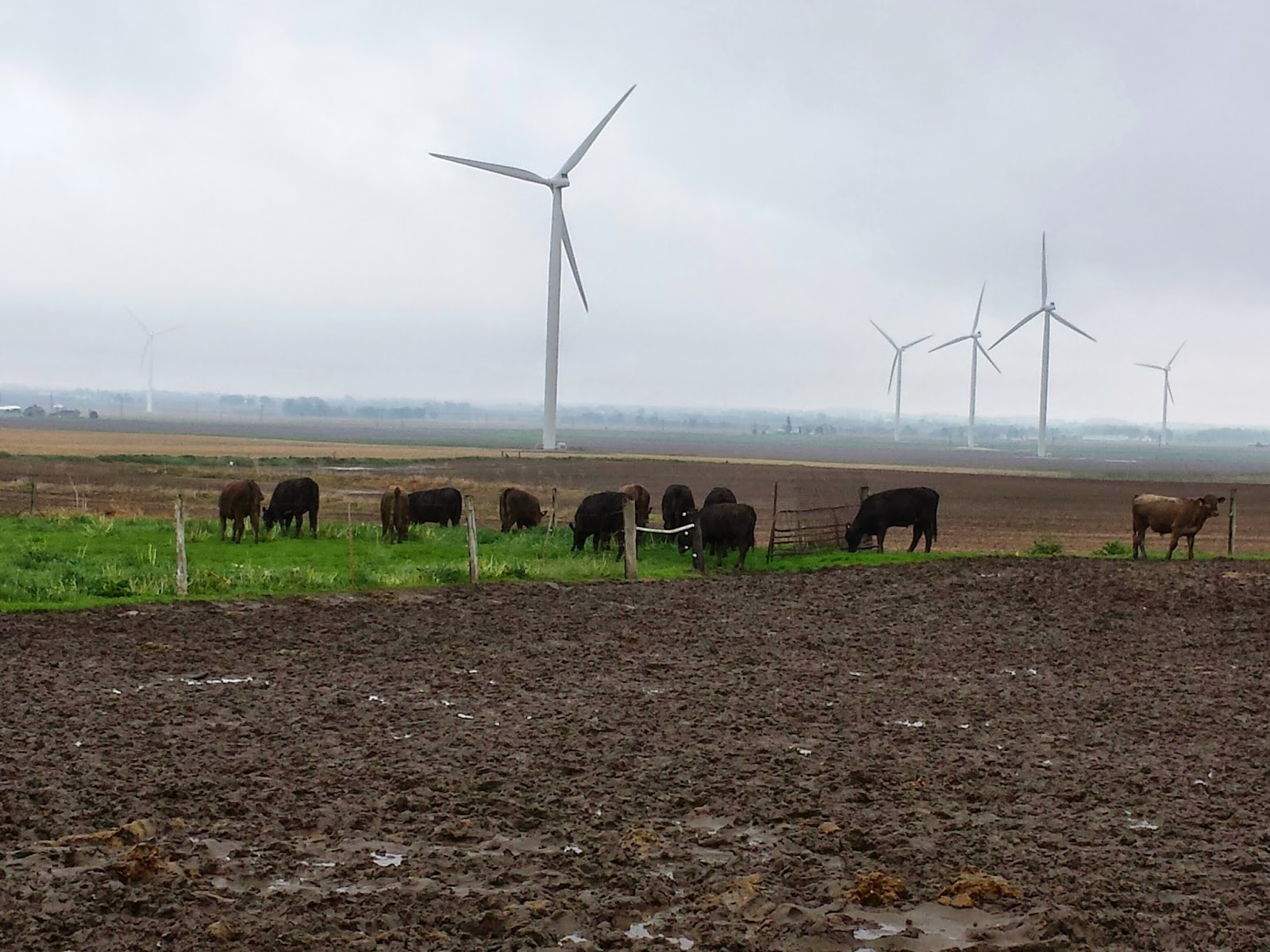 After moving new calves off the lot and bringing another set in to feed, we needed to move the new calves into an alley way (one side of a cattle barn) while we unhooked electric fences and opened gates for them to get into the pasture. 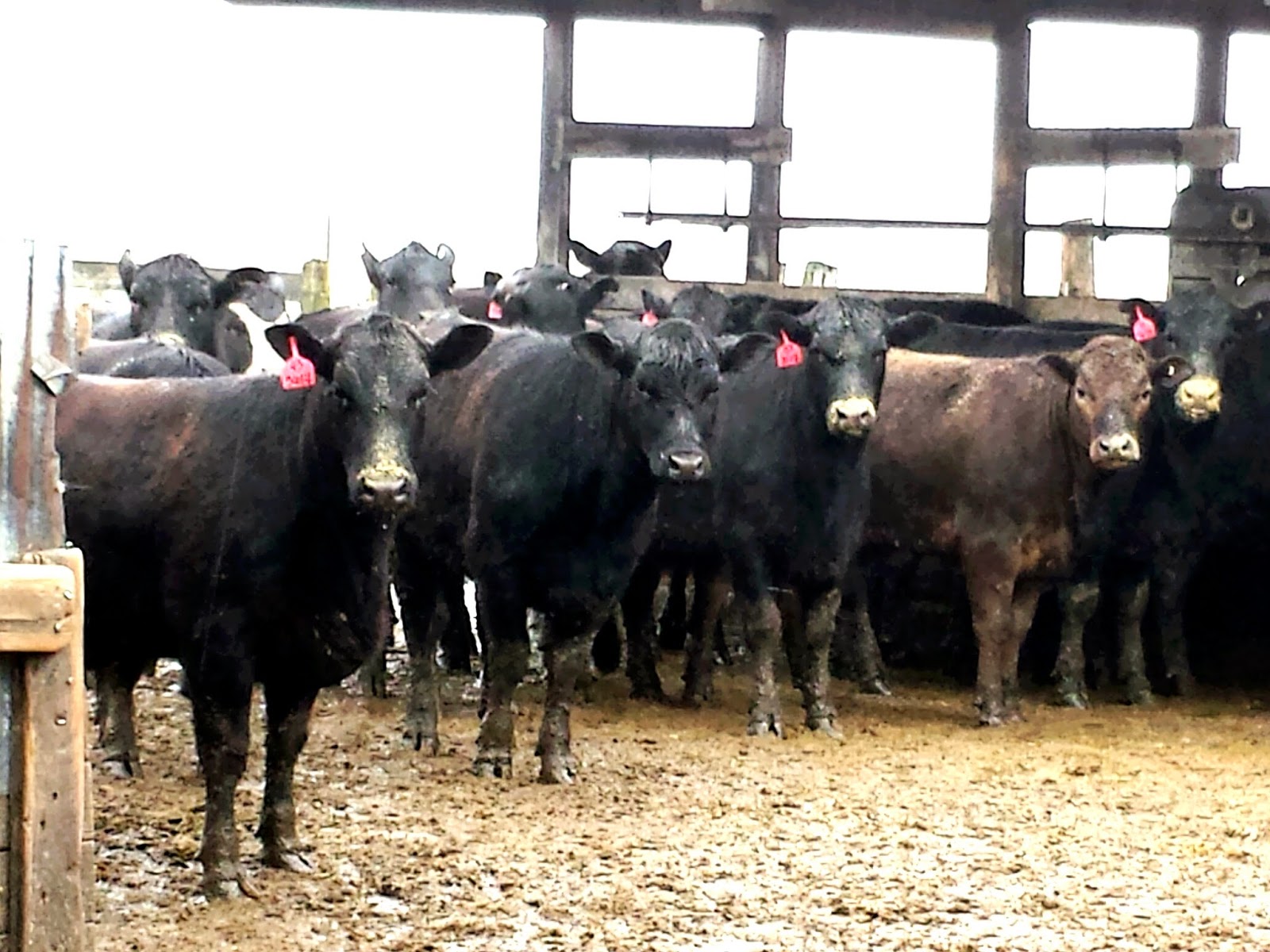 New cows waiting on moving to the pasture: 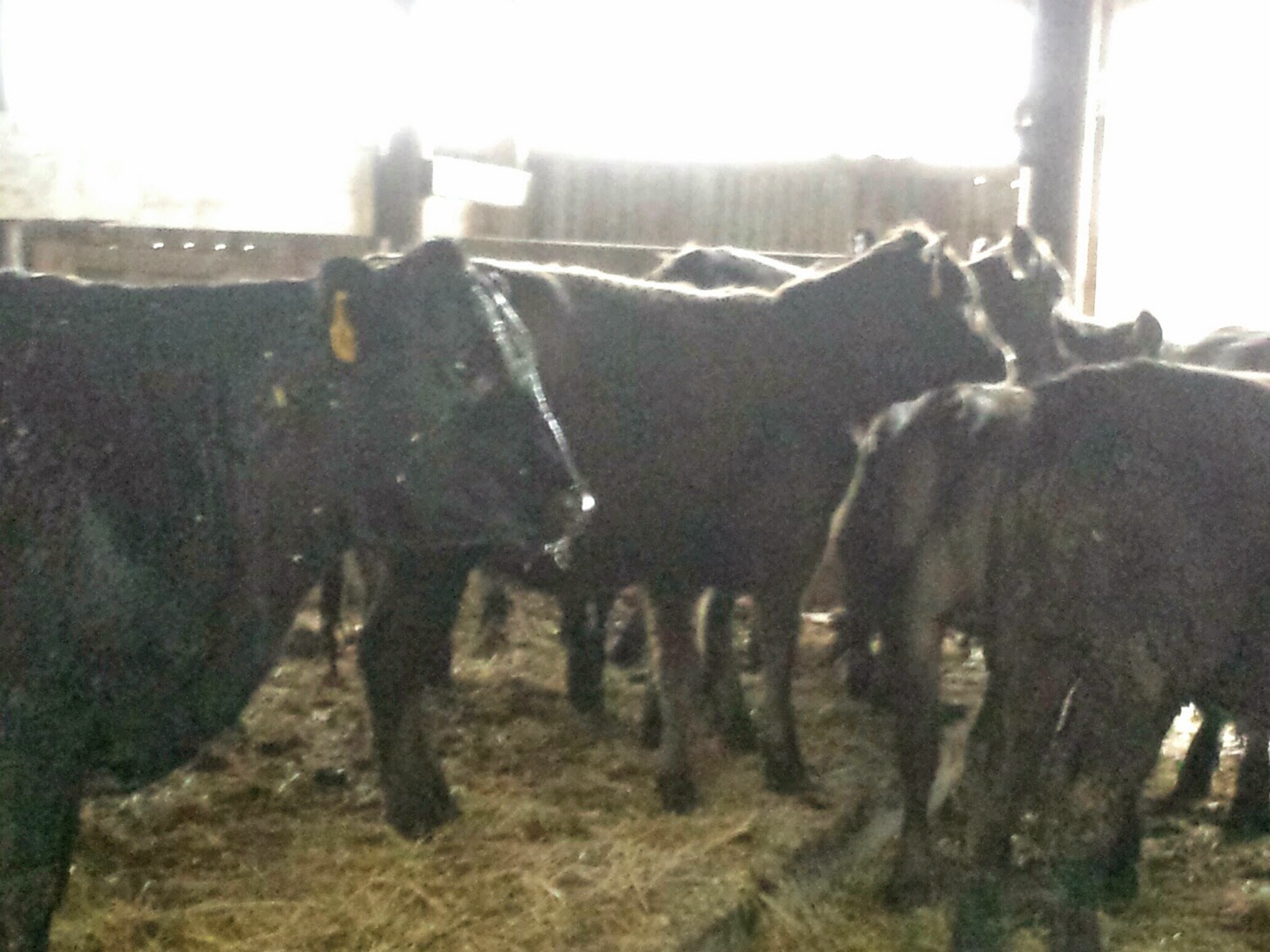 Tall Guy went over to feed the first group and sent me off to unhook the hot wire (no, this story has nothing to do with the hot wire being left on!), and then open the gate to the pasture.......

Only I never got that far.  While walking through the part of the feed lot that had a cement pad to stand on, I could see I was going to have to do some wading to get to the other side.  Slow and steady, that's my motto when walking into a lot with mud and shi manure liberally in my way.  I almost made it to the hay feeder when it happened....... I lost my balance.....sigh...

No I didn't go head first into seven inches of muck, but in trying to "right the ship," my left foot came out of my boot!!!!!!

Refer to picture of Charlie Brown at the top of this post.

Now what the heck do I do?  I am stuck in a three-legged downward dog position, the fourth leg is flying up in the air, and the boot its foot needs to go back into is about five inches from my nose!  I'm not sure if I have ever been flexible enough to get myself out of this position, so with two hands and one foot "firmly" placed, I tried to wait patiently for my husband to finish feeding his precious cows.

In the five minutes I waited for TG to come out and save me, two things happened.  The leg firmly stuck in the muck started to cramp up, AND my beloved father-in-law pulled in to the farm.......

After a very short debate, I swallowed my pride and decided to call to him for help.  He heard me, but he thought it was one of the barn cats squawking...........SERIOUSLY?????

By the time he realized it was his beloved daughter-in-law stuck out in the lot, Tall Guy came moseying over to see what all the commotion was about......

Well, as you can probably imagine, they had to take a moment to chuckle and regain their composure before helping me out of my shi crappy/muddy mess.

And you think that would be the end of my story right?  Oh NO!  This only gets better for the spectators and you, my dear reader!

I went around helping do other things that need done while in the cow lot because I didn't think I could get much dirtier.  My one foot had poop on it, and there was poop in my boot so I squished along because I was needed.

Just as I was heading up to the house to clean up, Tall Guy discovered a short in the electric fence, and he hollered at me asking if I would get him a few hot wire holder thingies and bring them out to him.  He's out by the manure pit!

I found the doo-hickies and trudged back out to the lot, trying to figure out how I was going to get them out to him without having a repeat performance.  I saw a path that stayed up by the barn, so slowly I moved out toward my goal.  I was walking on cement again, and the "stuff" wasn't too deep.......

......until my boot took the damning step off the concrete (yes, again!) and sank about 10 inches deep right back into the same muck as I was in not twenty minutes before....

What's a girl to do?  After encouraging TG to get his parts over to me as quickly as possible, I had to indulge both father and son a few good-natured pokes at my predicament.  I even, in the spirit of full disclosure, let TG snap a picture of me before pulling me out yet again. 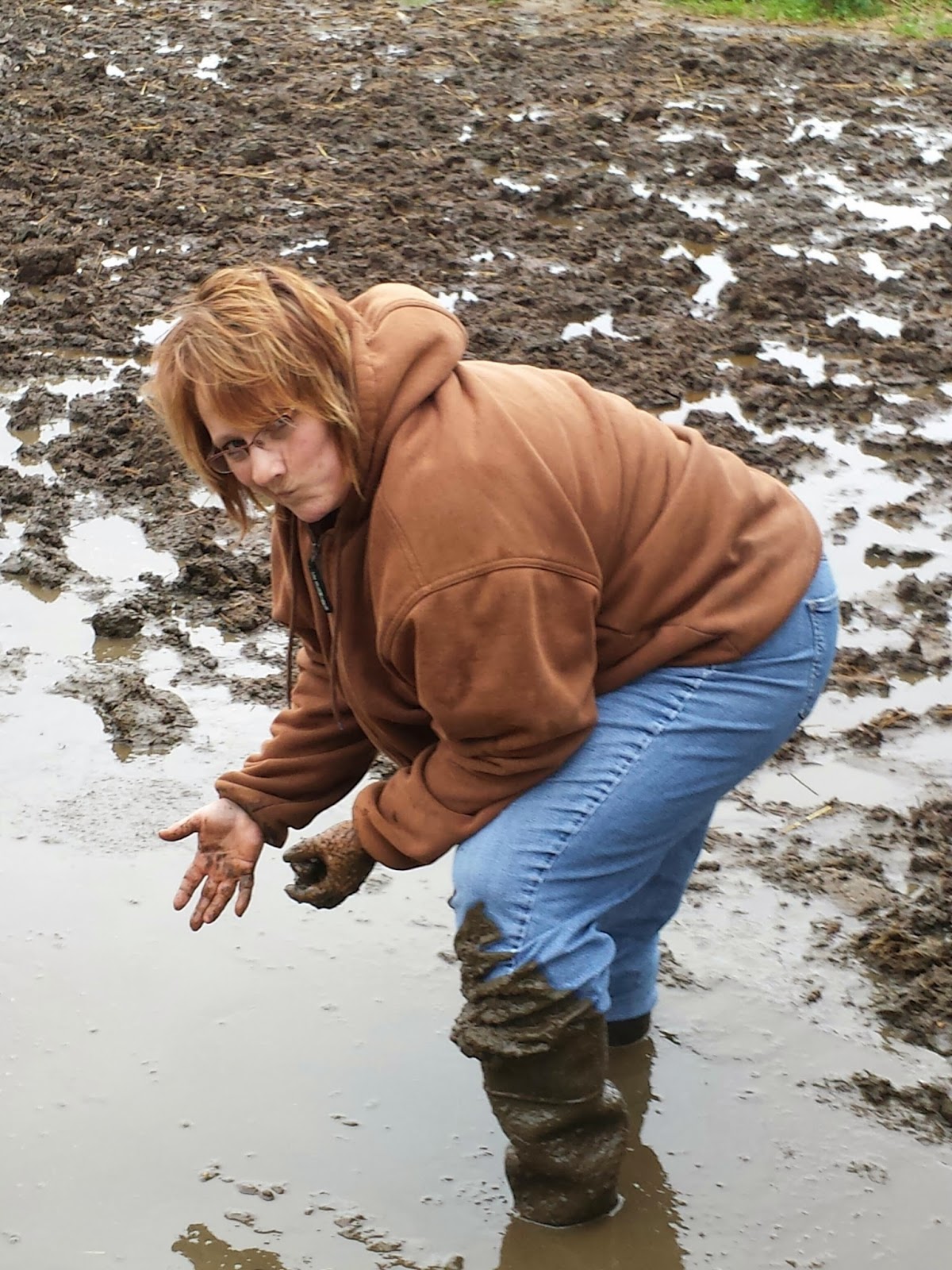 See how deep I was stuck?  I really thought I had lost that right boot, but it finally came out, and I said I was going inside.

I guess if I can manage to make two farmers laugh after watching it rain for the last five days, I have accomplished my good deed for the day.  Now if I could just get my fingernails and cuticles completely rid of organic material....... 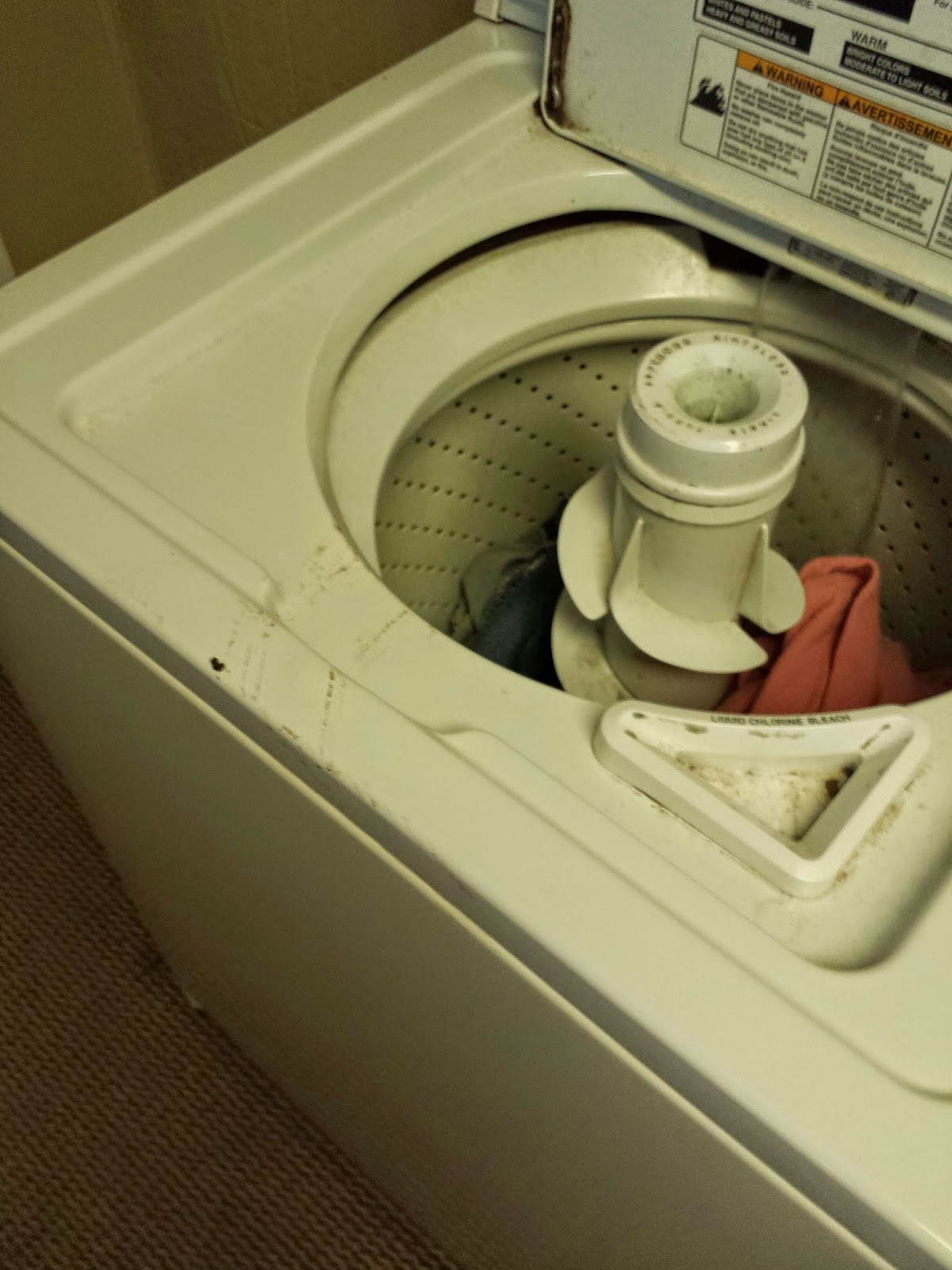 This is the way some mornings go on the farm!
Posted by Lana's LIfe at 9:57 AM