November 6: Balance at a Fingertip 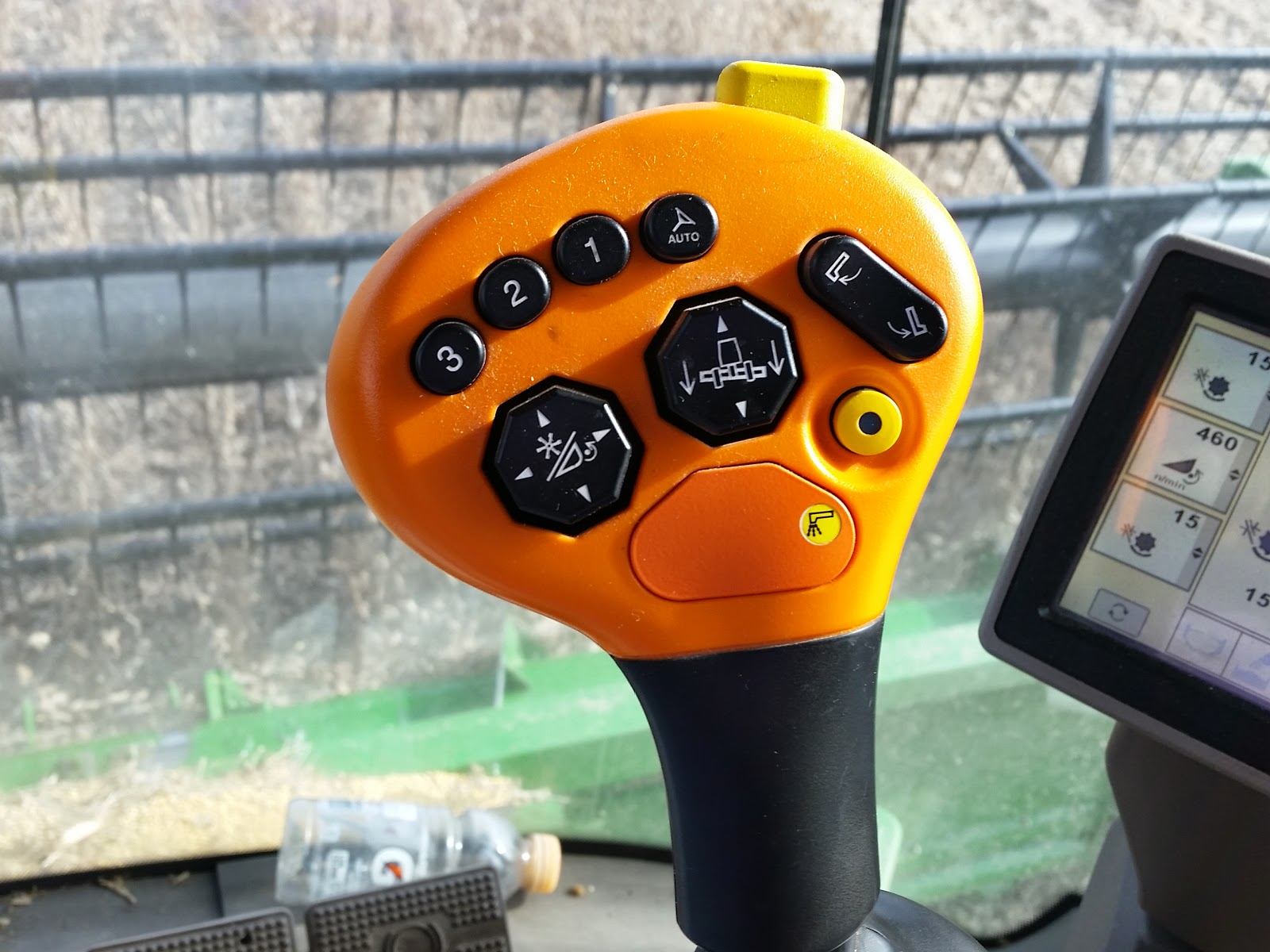 I really think I should have played more video games in my younger days..... I seriously don't think I have ever tried to play one video game since "Pong."  WOW  I just dated myself....

This little gadget in the pic above has been my best friend and most evil nemesis for the past 32 days of harvest!  It controls the combine.

Push it forward, the combine goes forward, pull it backwards, and, well, you can figure it out the direction it goes, but when you are unloading the corn/beans inside the combine to the auger wagon being pulled by a tractor about 12 feet away from you, AND you hit an uneven stretch of ground, AND it is night time.....All.The.Way.Dark. Night.Time.......Let's just say a girl can get a bit too panicky and confused in just a blink of an eye.

Push Button #1, and you will raise the corn head or the grain table.  This is NOT a button you should push when trying to start the auger....just sayin'

Push Button #2, and the grain table/corn head lowers to the ready position to collect the grain.  Push it again, and you will engage the auto-steer...probably....unless you don't think it did so you push it again which might disengage the the auto-steer.  You will know this immediately if you are picking corn (shelling it as some of you say) because the corn stalks will swish back and forth in an alarmingly crazy dance.

Push Button #3 if the above has happened and you need to back up and get lower to the ground to pick up the corn stalks you knocked down....

The longer button that has pictures of an auger on it is pretty self explanatory: push the top of the button to bring the combine's auger out so you can transfer the grain you picked, and push the bottom of the button to put the auger away.  It's very important to keep this straight......take my word on it.

The last button that you kind of need to know about is the only yellow button on this .....what do you call it....control center?  This is the magic button that will engage the auger to run the grain in the hopper of the combine to a wagon or semi.  I can't even begin to tell you that this button is the most important......  If you look at the control handle again, though, you can see how close it is to the auger in/out button and the middle stop sign shaped button.  That button allows you to raise and lower the head manually.

I'm not sure if spending a few hours playing Mario Brothers or blowing up enemies would have helped me, but there is a great deal of power and motion involved in this one small space of control for a combine.  It takes a few minutes to get back up to speed after a break or after a long time with no break.  It's all in balancing out learning skills, situation assessment, and having a forgiving father-in-law in the machine beside you when you have an "Oooops!" moment.
Posted by Lana's LIfe at 9:10 PM