I survived last night!  Wooooo!   Let me just say in hind sight, I wish we had been able to ask all of Tink's classmates to spend the night, but I had serious doubts about how I and my house could handle eight third graders and two first graders, so I set the third grade limit at three.  It's my goal to have the rest over at another date, maybe when I can turn them all loose outside.

Everyone but one did make it to The Muppet Movie at our local theater.  I met them at the door to take care of admittance, and Tall Guy was at the goodies counter to make sure no one went hungry!  $2.50 for a bag of popcorn, drink, and candy.  Thanks to another set of parents who helped with the seating!  Can't beat the small town theater for great family friendly entertainment!

I defy anyone to watch this movie and NOT sing along to at least two of the songs.  I was sucked right in with the opening production to The Muppet Show;  you know, 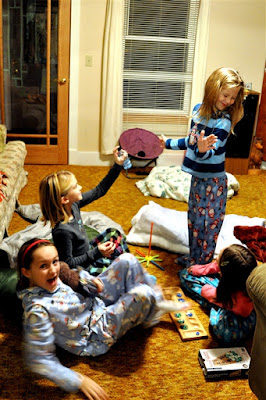 Of course, when we brought everyone home, NO ONE was ready for bed except Tall Guy and me, so we let them have at it for a while.  At 11:30 we headed up for bed and suggested they go to sleep. 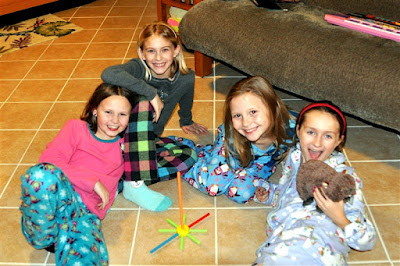 At 2:00 A.M., I am awakened by the tromping pitterpatter of little feet upstairs in the room next door..... WTH!?!?!Downstairs I go to investigate.  Tall Guy is about as much help as he was when the girls were newborns! :-P
After this trip down, I told them to settle down and go to sleep or I was going to send Daddy down.  I hear more of a ruckus, and decided to try one more time.  They thought Tall Guy was on his way and were scrambling.  Too funny.  I put  The Smurf Movie  in the player and told everyone that unless it was a severe bathroom moment their tushes were glued to the floor.
This is what I found at 7:30 when I came down. 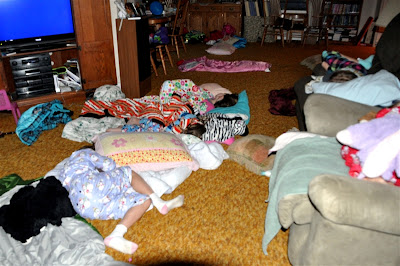 Breakfast was bacon (Yeah Pork!) and a variety of pancakes served to order (plain, blueberry, and chocolate chip).   They played some more, amazingly with old toys like Lincoln logs and Tinker Toys, and charades until parents started to arrive.  Bear and her buddy were a bit camera shy, but I promise they were in the mele somewhere.
I survived!  We survived!  With one of the sleepovers under my belt, my advice is to not be a control freak (like I tend to be because I used to be and always will be a teacher!) and just listen for big sounds that you think you should investigate.  It seems to work best that way.  Oh! and have a 6 foot 3 man on hand who looks stern when he needs to.
So I say Bring it 2012~!
Happy New Year Everyone!
Posted by Lana's LIfe at 5:26 PM