If you have been following this story last week on my personal or blog Facebook page, I have happy news to report! 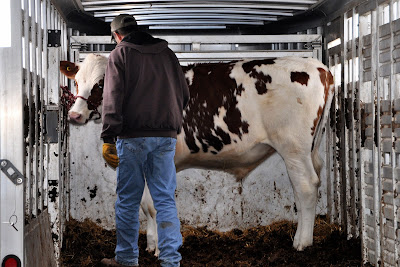 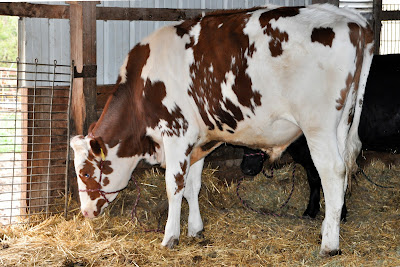 Seems he has an infection somewhere in him that we couldn't find here. Tall Guy thought he had a DA, which stands for "displaced abomasum." The abomasum is one of a cow's four stomachs.  I just saw a blog that talked about feeding magnets to cows.  We sometimes do it to catch bits of wire or metal the cows might accidentally digest.

Here's a picture to kind of show how it works.  The dark teardrop shape is the magnet.


To backtrack, Tall Guy had been noticing that Jerry wasn't eating as much as he should or drinking as much as he should.  He listened to his stomach, and it would "ping" like the inside of a basketball would sound if you thumped it. That, apparently, is only a good sound if you are a basketball.  We decided to take him down to Purdue's Large Animal Hospital (TG had been on the phone with them a couple of times).  I knew if it was a serious thing with his stomach, Jerry probably wouldn't be coming home...so I called the girls out and told them what was going on with Jerry.  I probably had more tears than they did, dang it, but I want them to know the truth. It's just the way it sometimes works on the farm.  Life and death are a big part of the cycle, and we raise beef to be eaten.

So now we have to decide what to do with him.  TG is thinking Jerry might be too off his feed to be "finished" by fair time.  Finished to cows is like a body builder being at his/her peak for a contest.  He may get to go out and hang with a new bunch of beef cows we just brought home from the sale barn and just get to be a regular cow....We have some more consulting to do.  Meanwhile, we still have five steers and a heifer in the barn to break, AND the biggest news is that Lady Bug is returning so we can show her at the fair one more time. 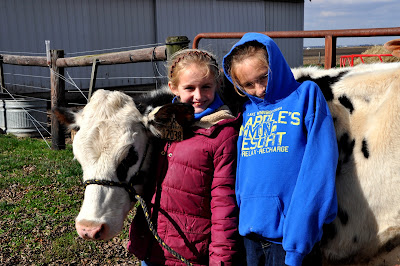 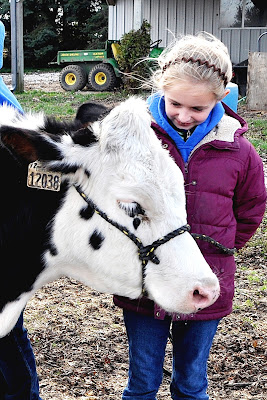 She's expecting!  More about her when she actually returns to the farm, but based on her ability to get along with this "little" pig, she should be a great momma! 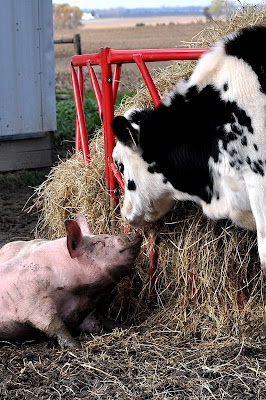 But for now, we will keep our eye on Jerry and make sure he is getting the best of care so he can be all that he can be in the world of cows.

*Editors note:  Jerry is down in a lower lot with other beef cattle working his way back up on feed.  This is  a good thing because he will be with other cattle eating at his own pace.

As a side note, I honestly had mixed emotions about Jerry coming home because now we will have to go through the "Good-byes" all over again, but again, this is what we do, and sometimes you do get attached, and it is hard, but we have to know that each beef cow that leaves our farm can feed one family for an entire year.  That is a big part of what we do to help feed this country.  I just need to tend to my heart a bit so it will be ready for the next time.

For now, Welcome Back Jerry! 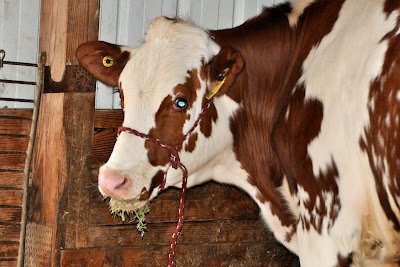 Email ThisBlogThis!Share to TwitterShare to FacebookShare to Pinterest
Labels: beef and dairy cows