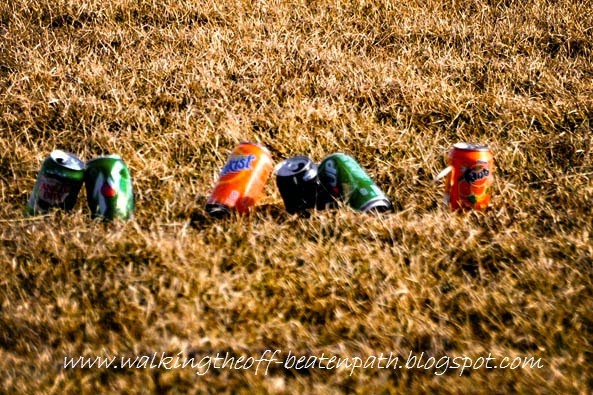 It was actually my idea.  Nice way to start a story, huh?  Well it was; I wanted the girls to learn how to shoot a gun.  It's an important skill to have out here in the country, and I want them to know the right way to handle a gun.  I was brought up learning about guns and how to shoot.  I can still pick off a ground squirrel in one shot.  Those critters are pesky little chewers, and they like to chew around the house.  Another reason I want the girls to be able to handle a gun is the alarmingly increasing number of coyotes here.  There are holes along our road where the coyotes have been doing their own best to catch ground squirrels.  In a pack, they could take down a calf, and they are not afraid of humans.  One was not 50 yards from the girls and I one day when we were out in the field picking up rocks. 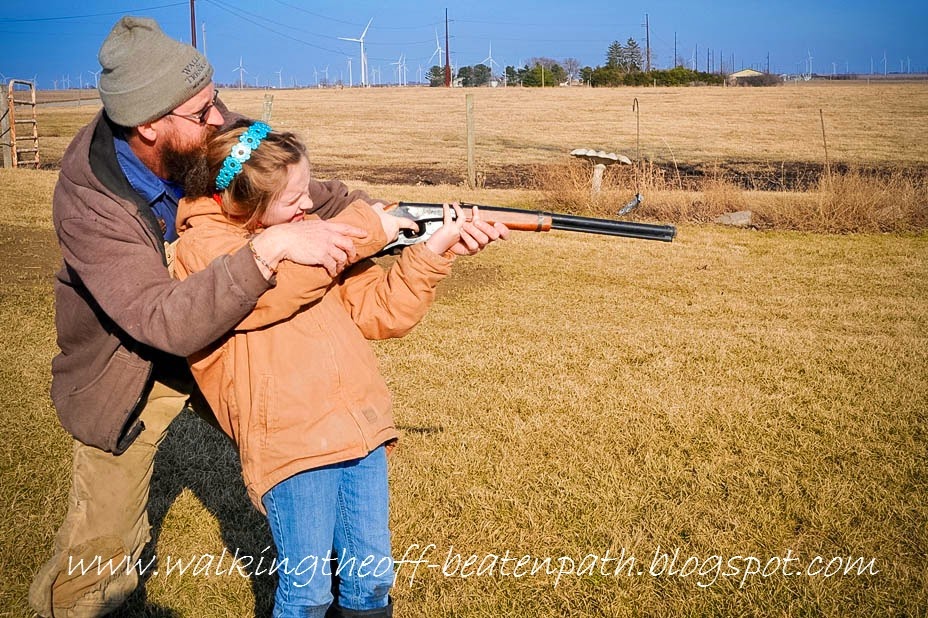 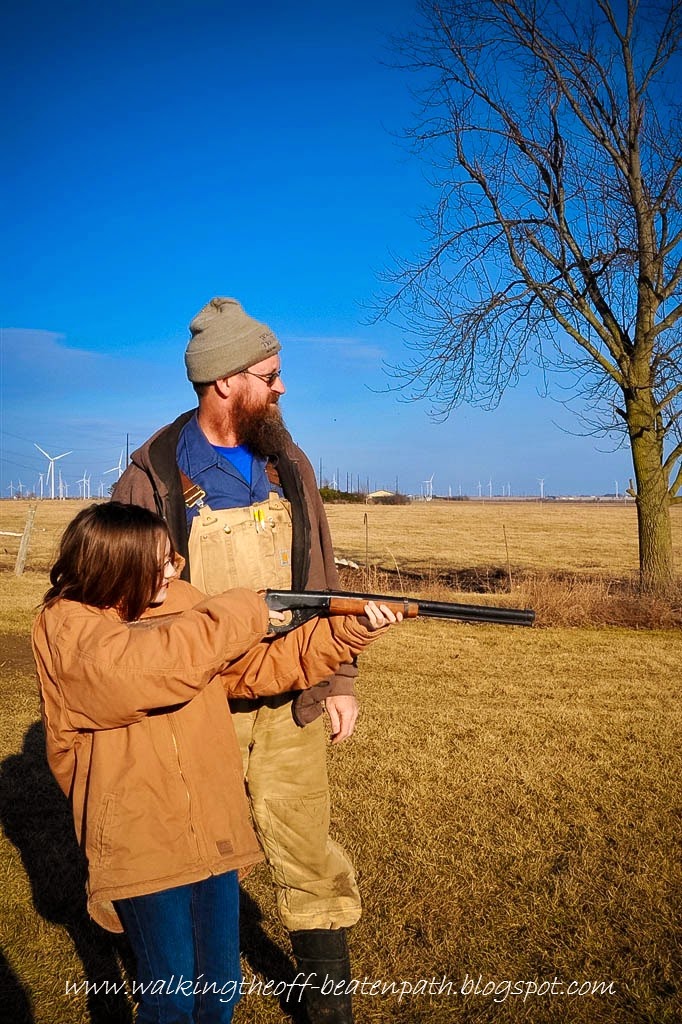 So while I was in Washington D.C., Tall Guy took the girls to lessons to help with their 4-H project of shooting sports.  Both did very well in the classes, and the first warm day we had, they wanted to show me what they could do.

Now, here's a story..... Tall Guy brought out an old BB gun for them to use.  I wanted to shoot too, so when I took aim with it, I was in for a big surprise.  The barrel was bent!  TG told me the story that started "back in the day...... 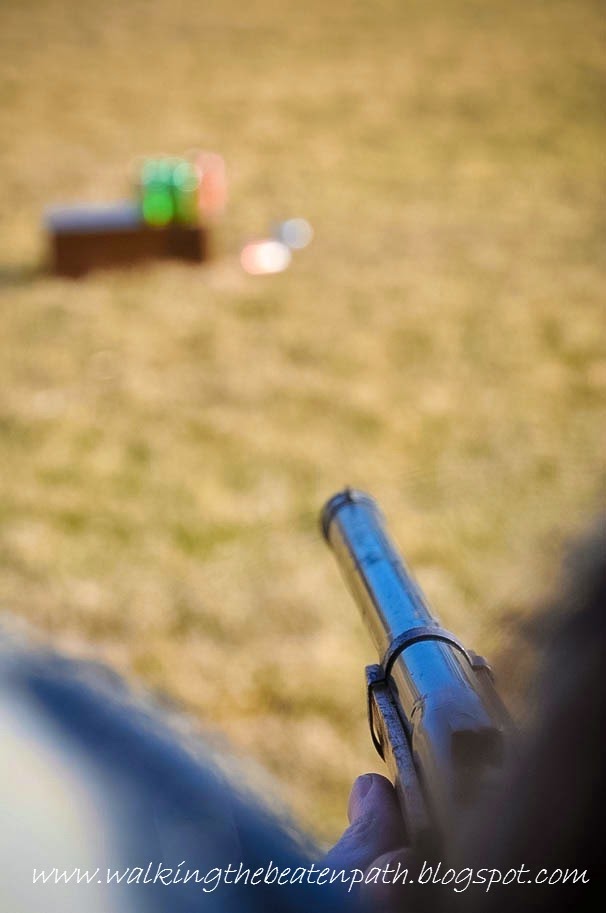 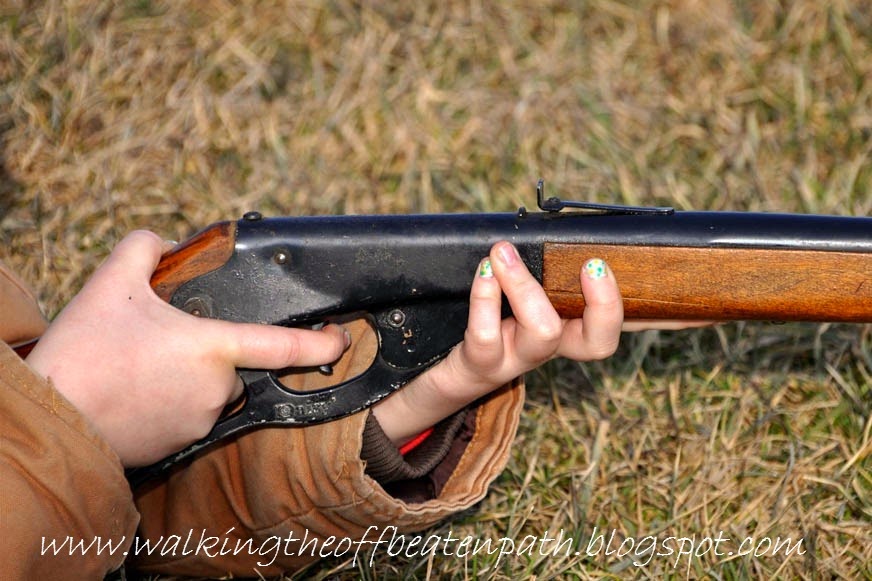 when there were dairy cows on this farm, there were also beef cattle here and a bull or two.  One day one of the bulls got out, and it was up to TG and Grandpa to get him back in....  If you don't know much about cows, remember this: One does not get near a bull!  They are big and cantankerous!  In their attempt to coax the bull back in the pen, they tried to "nudge him" with the BB gun.  Well he didn't like that much and apparently he charged. The barrel was bent because it was the only line of defense between man and bull. Sometimes necessity is the mother of invention and preservation!

The girls had a lot of fun hitting cans on and off the box. 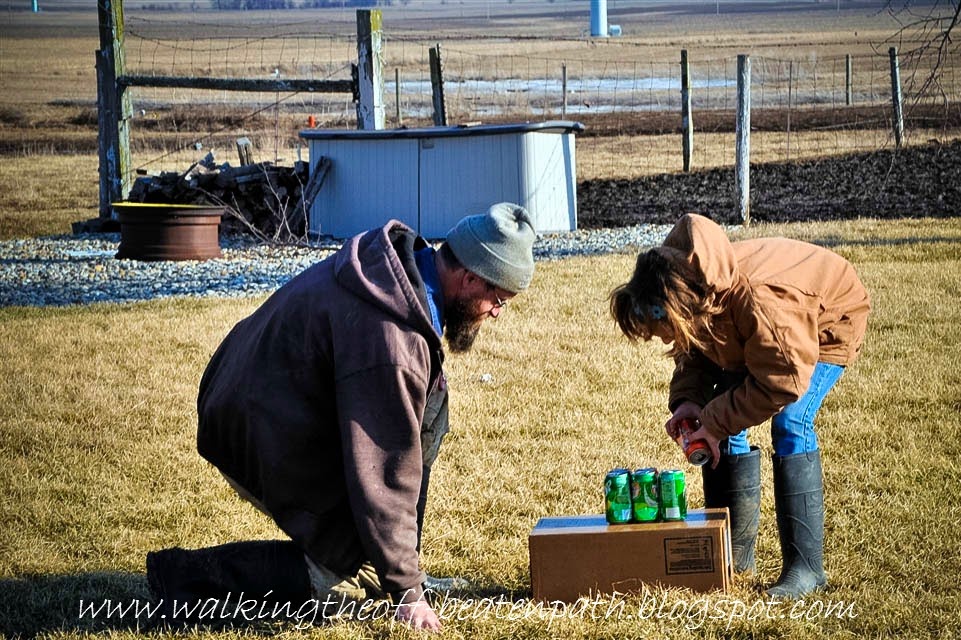 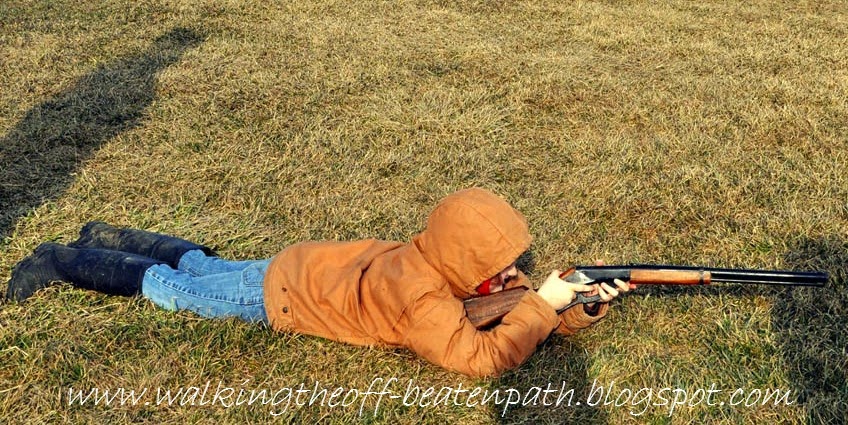 After the long cold winter here, it was nice to sit out in the sun.  Tink was content just to hang with her four-legged peeps. 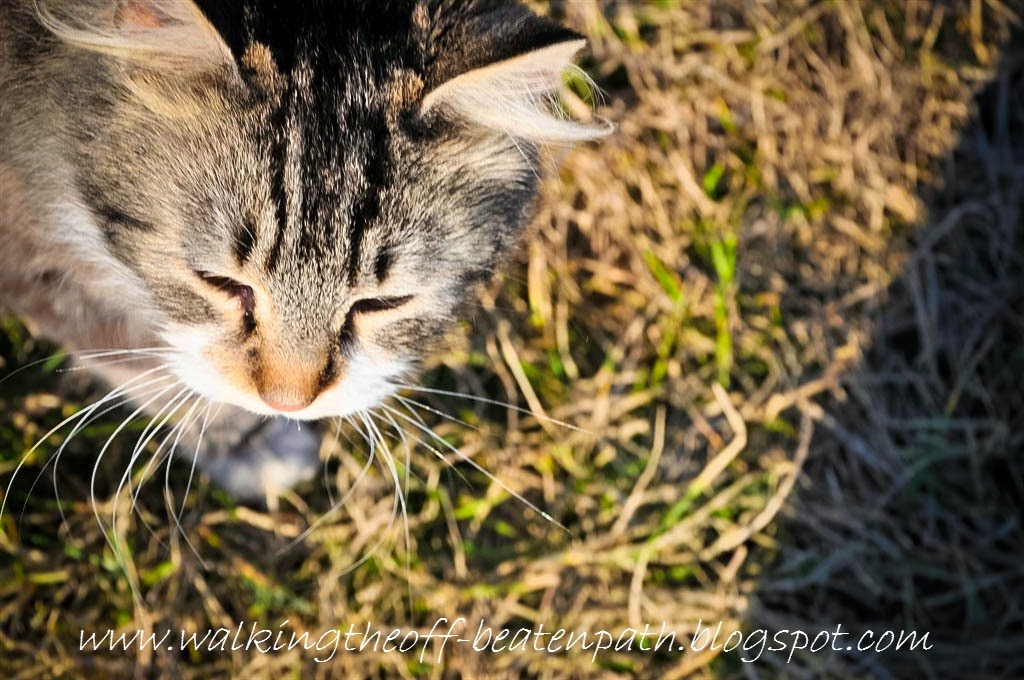 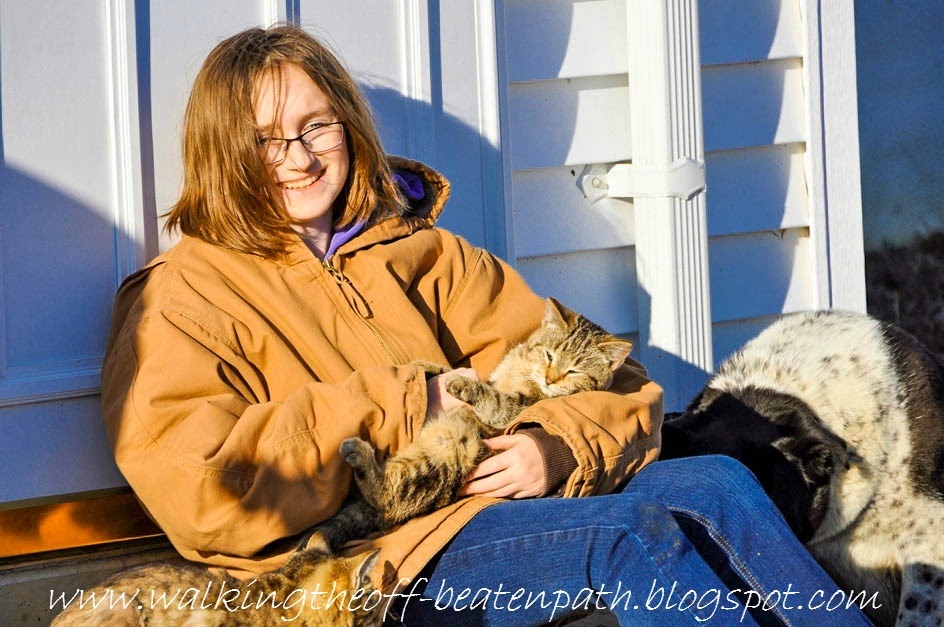 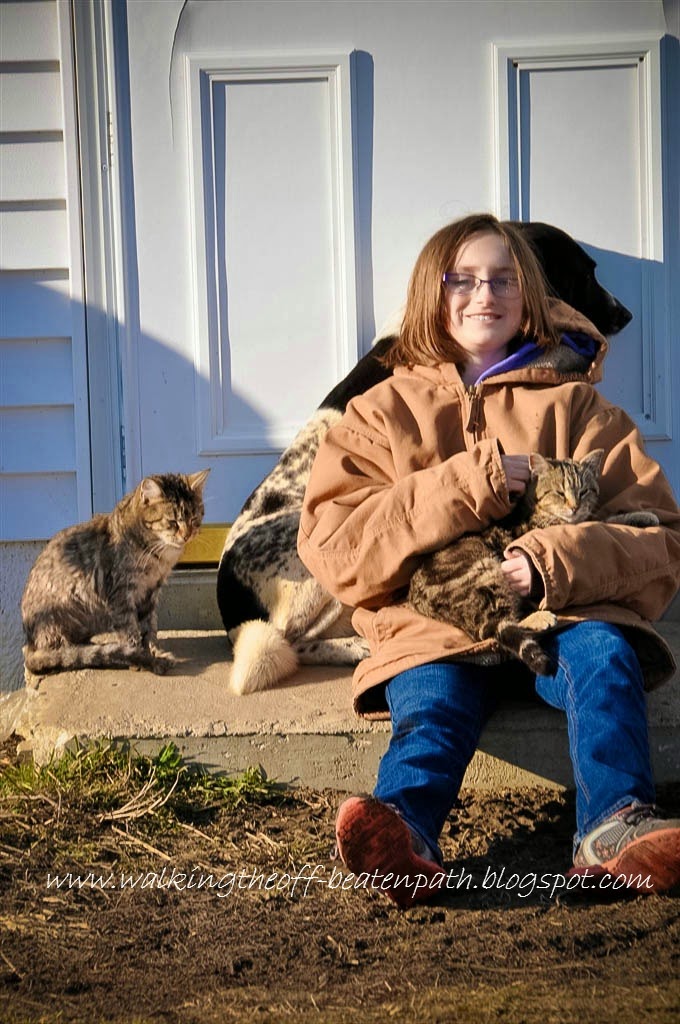 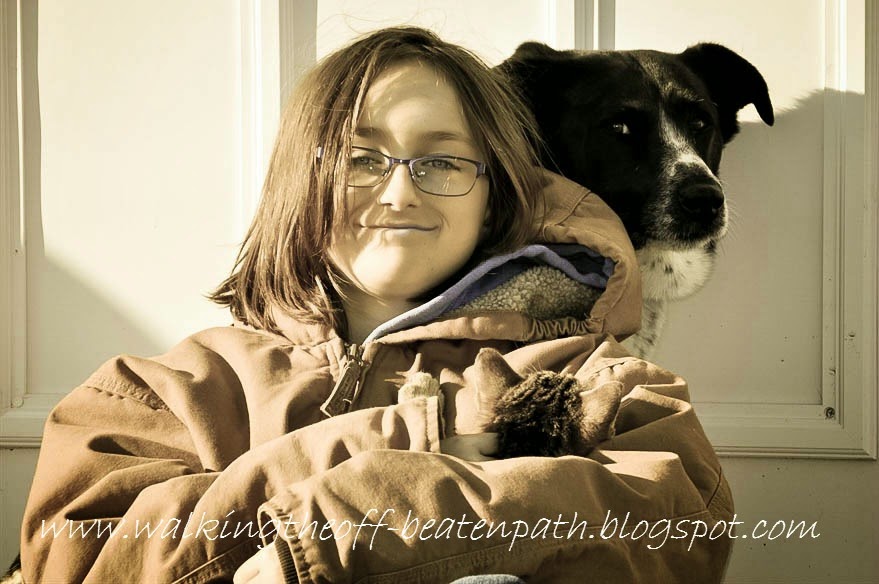 It is our hope that the girls will continue to practice their shooting skills and learn about the safety and responsibility that goes with handling a gun.  Several girls around here hunt wild turkey, rabbits, and deer with their dads.
Don't forget to read my three recipe posts from Gooseberry Patch's new cookbook, Good for You.  Leave a comment and be eligible to win a copy of this book for your kitchen.  Click here, here, and here.  I will draw a name tomorrow around 5:00.
Posted by Lana's LIfe at 6:29 AM