I have to tell you that I am a lover of cold weather.  I become suddenly chipper and smiley when I see the first leaf turn or feel that first cool northern breeze.  I even like snow, but I have to say I would rather not see any of the white stuff until we are finished with harvest.  As of Friday, we have seen TWO days of snow showers.

Friday was just about the worst day, weather wise, I can recall of a harvest.  Now that's in the 13 years Tall Guy and I have been married.  Grandpa, my FIL, said it was one of the nastiest in his memory, and that has 70+ harvests to consider.  It. Was. Raw! 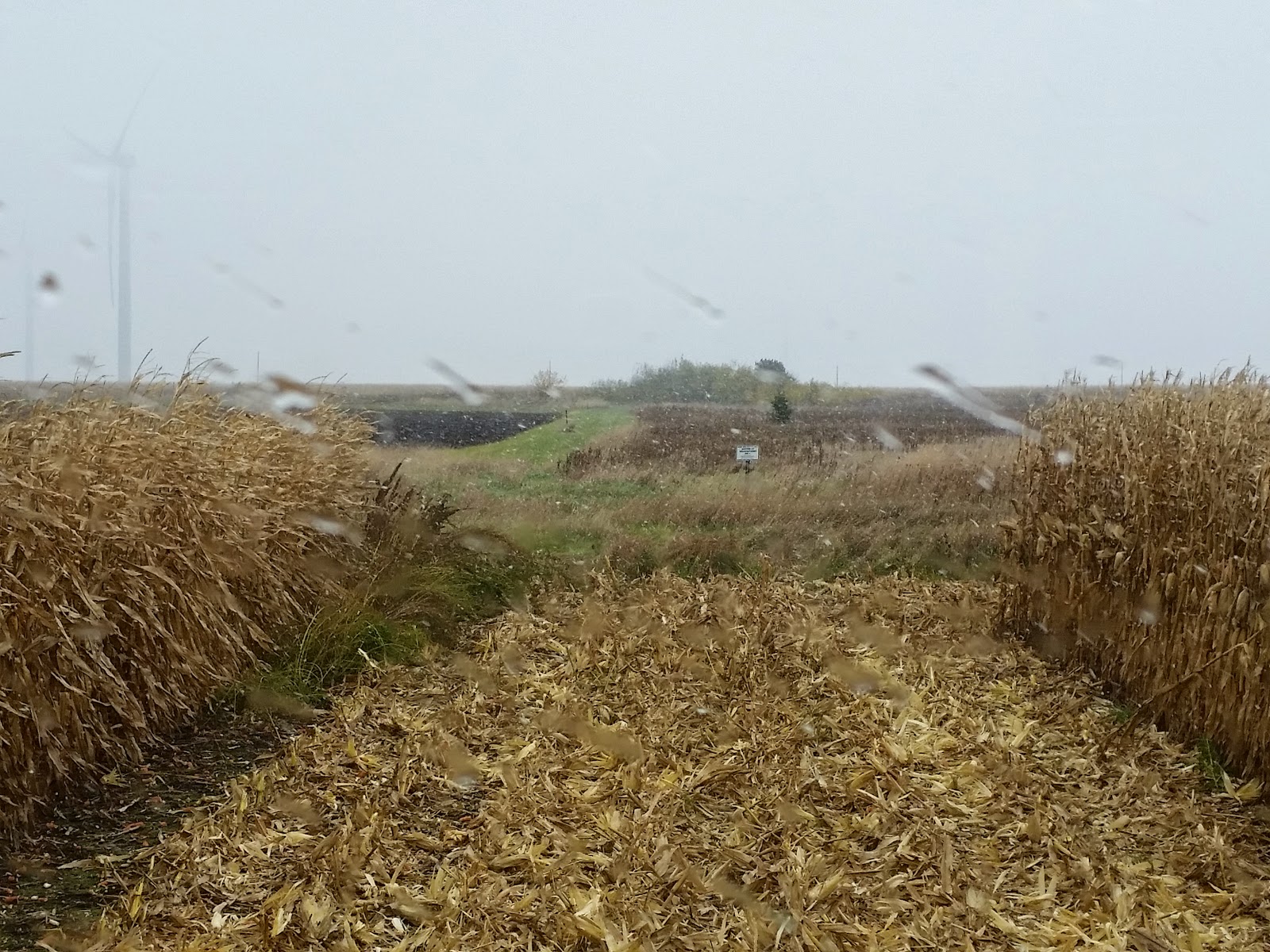 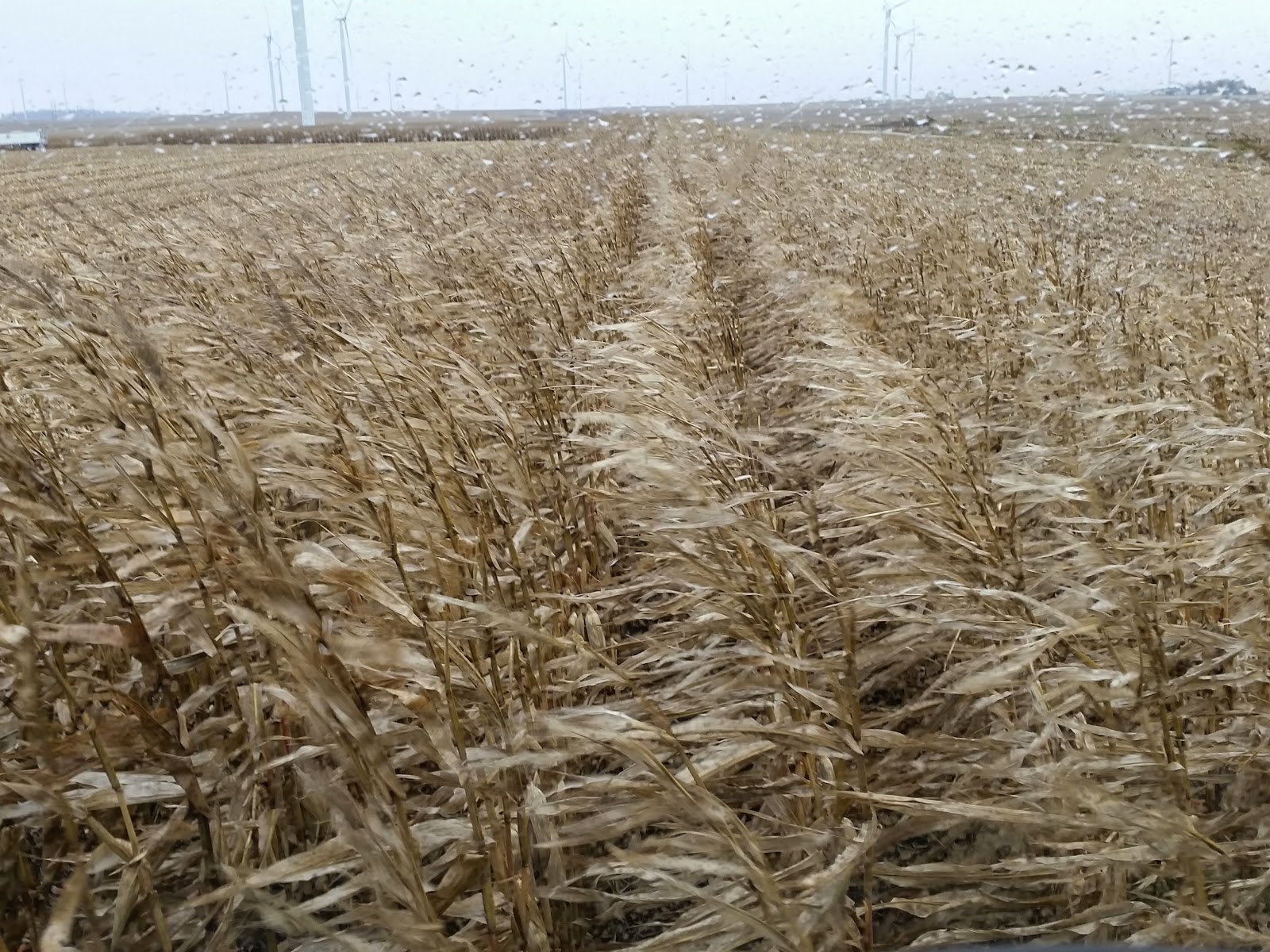 The wet stuff on the window of the combine came down in snow and sleet.  I couldn't even see out of the window to my right; it was caked with "bees' wings" (that's the chaff from the kernels), old silks from the ears. and frozen "stuff" courtesy of the sky.  The stalks on the northern edge of the field were starting to go down, and we even had to turn the combine out of the wind so we could open and close the door!  Blehk! Here's the even more amazing part: we had to unload on the go from the combine to the auger cart, and then the auger cart had to dump the corn into the semi trailer.  Needless to say, a few kernels did not make it to their destination! (no pictures of this; you just have to take my word for it because all sorts of "stuff" would hit the fan if I was taking a picture and unloading at the same time!) 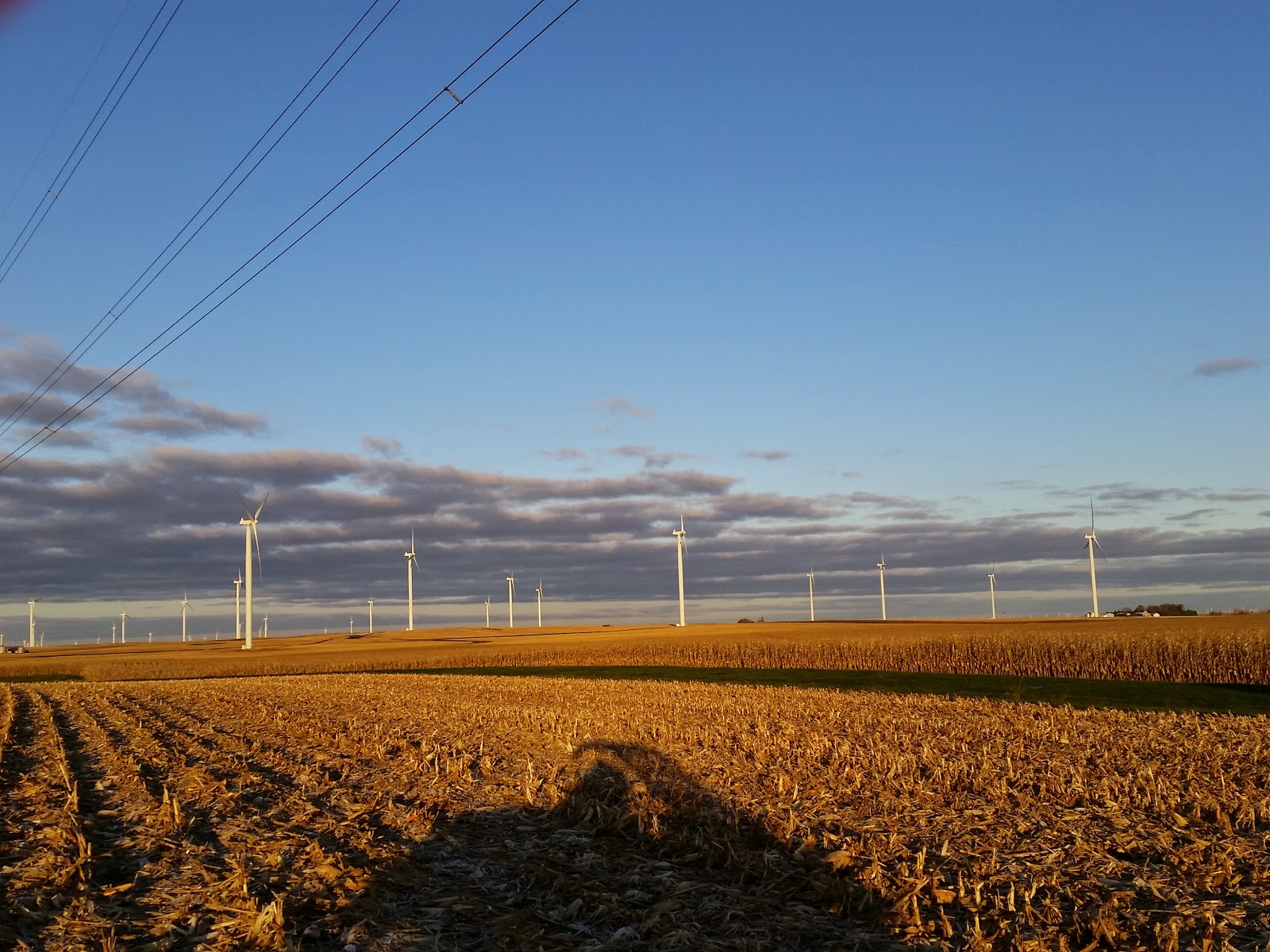 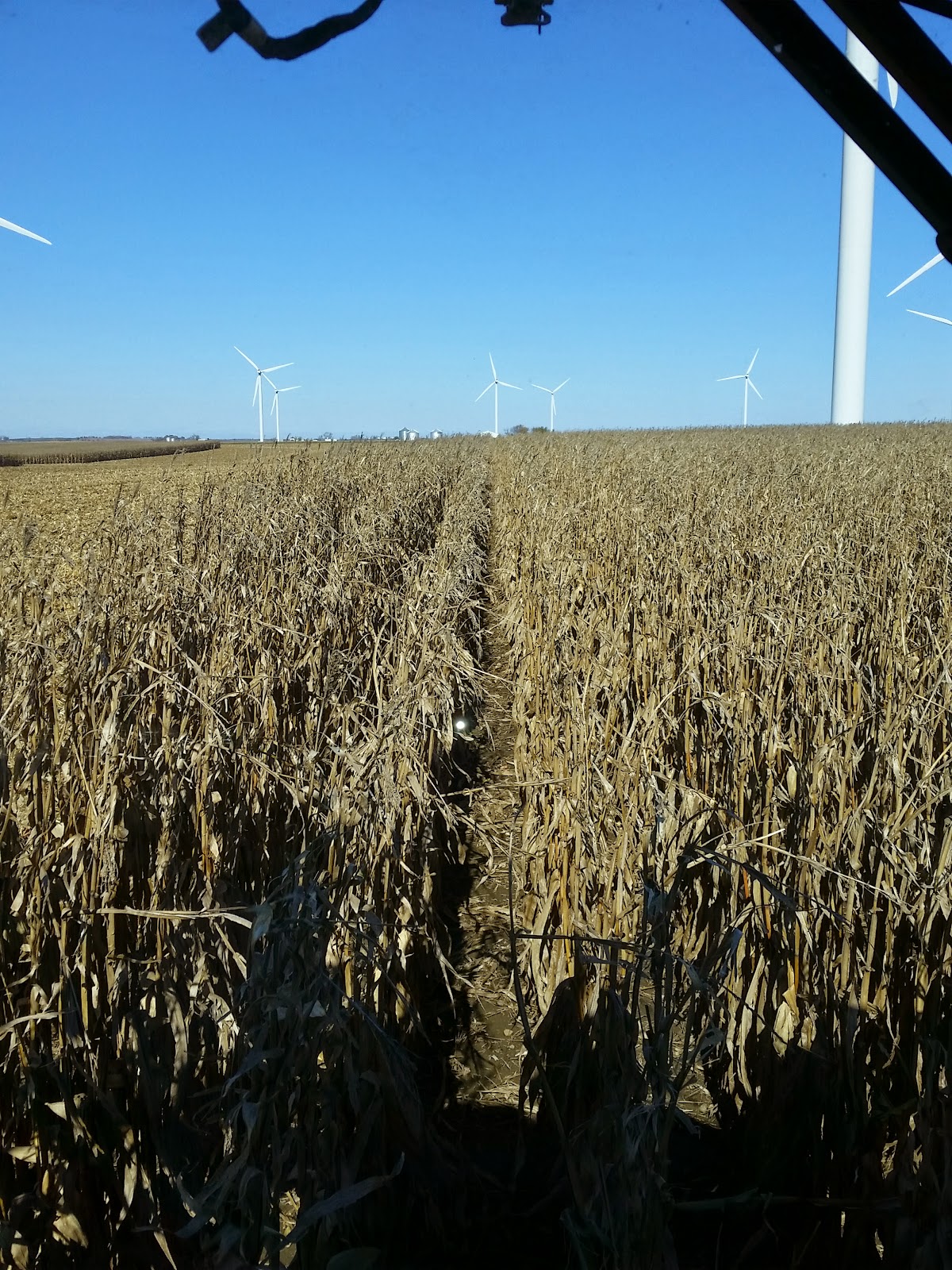 The corn looks a bit beaten up, but at least it's still standing!

It was chilly, but the sun came out and the day was gorgeous.  It's amazing what a sunny day can do for everyone's moods.  I saw bunnies scampering around the newly bare bean ground, and a doe looking for her usual place to rest for the night.

Tall Guy calls this picture "Two Deer"  (Get it?) 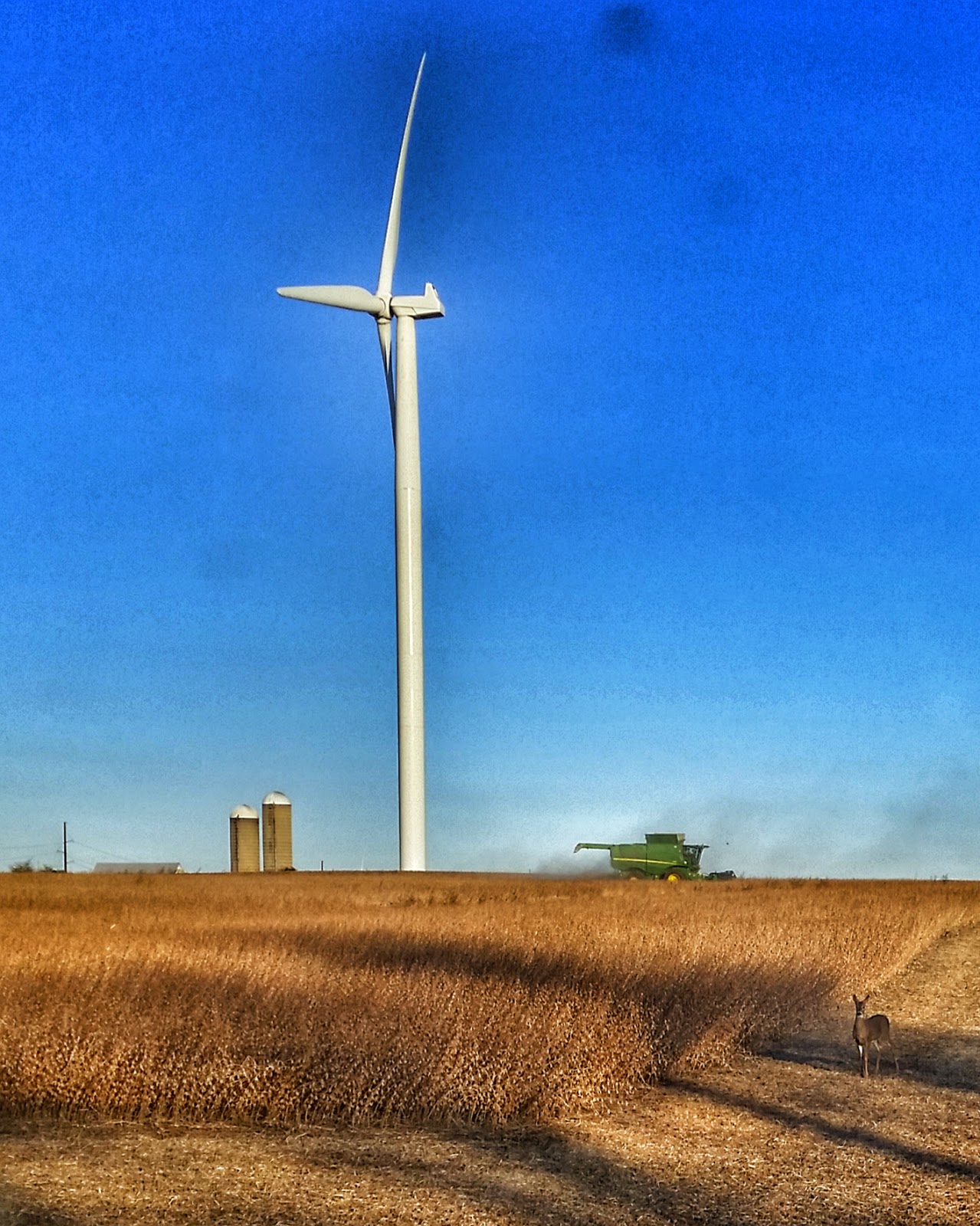 I guess I felt a bit like the mail man with all that "neither rain, nor snow, nor gloom of night...." because we really need to get these crops out before the corn falls down and the bean pods pop open with all the wet/dry weather we have had roll through here. And so we balance what we have to do with what we can do every day.